This pretty sorrel Quarter Horse will make a fine trail or pleasure riding horse. All Jada needs is someone to ride her. She has wonderful ground skills: easy to catch, loads, halters and leads really well. Jada gets along great with other horses in the herd and forms strong attachments. She loves being petted, groomed and loved on by people. At 14.2 hands high, she is a good height for many riders. Jada does need a refresher on her riding skills. She stands while being tacked and mounted. She does great in the arena, easily moves out and walks however she needs work on trotting, cantering and backing up. These issues will likely clear themselves up once she gets her new best riding friend who will work with her on a regular basis. See more pictures and learn more about Jada: http://www.habitatforhorses.org/jada/
[spacer size=”20″]
[column size=”1-2″ style=”0″ last=”0″] 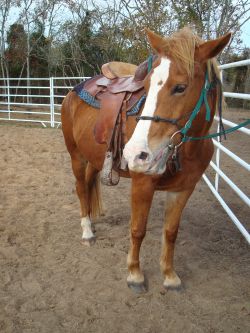 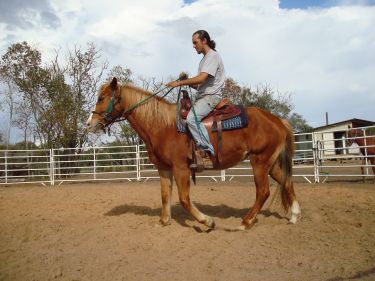