“I Believe in You”

Habitat For Horses / Reflections  / “I Believe in You”
0

“I Believe in You” 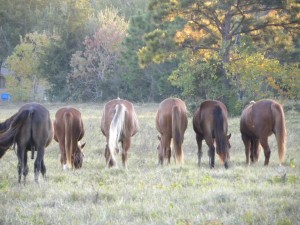 He stood alone in the pasture, looking at the distant shapes of horses as they moved ever so slowly through the darkness, heads down, grazing one last time before they settled in to sleep. Quietly he walked towards them; few raised their heads, most ignored his footsteps. He had been here many times before at this hour. He was the one that walked like a ghost amongst them; touching, talking softly, standing silently in their midst.

“I believe in you,” he said. “I stand in awe of you and all you represent. Some of you are so young, some so old, but all of you are wise, far wiser than I. You live in a world far separated from mine, a world so different, so foreign, that I can only grasp a small portion of your nature. I wish it were not so. I wish I knew, beyond any doubt, all that you are.”

He walked to one, touching her, smelling her mane, breathing deeply.

“The water, the feed, the hay – those are only the basics. You have those now. Once, most of you were deprived of those things. You knew hunger and thirst. You knew pain and suffered silently, unable to draw attention to yourself. There are thousands out there, in the same darkness that surrounds us, who are suffering as you once did. I hear their cries, but I don’t know where they are. I don’t know how to reach them.

“Thousands more suffer the whips of man, tremble under the fears of another beating, the approach of a human, fearful of being touched for any reason. I don’t know how to reach them, either. They stand afraid and I cannot help.

“Thousands more will die a horrible death, stripped of their skins, cut into chunks of meat and shipped to foreign countries to fill the stomachs of humans. Many stand in pens tonight, unaware that the vision of the rising sun will be their last vision of this earth. I don’t know how to stop the slaughter, but I am trying. With every fiber of my being, I am committed to seeing it end.”

He walked to another and gently touched the velvet softness around her mouth. An older gelding walked up, waiting to feel the gentleness of his hands.

“There are reasons why humans do as we have done. We feel powerless, so we seek power over other living things. We are insecure, so we buy and own and play an imaginary game of being secure by surrounding ourselves with things we control. We fear our own mortality, so we play with immortality by controlling the life of others. We are driven by money, so we buy and sell life without any thought as to what life is all about.”

He held the old one in his arms, talking softly.

“When we look at ourselves, we cannot say, ‘We are human,’ with any sense of pride. It has become an excuse, said with head down and with sorrow for what we have done. ‘We are only human.’ It is given as a reason for our failure.”

He walked away from his small herd, back to his truck. He stood by the door, unable to go on. A tear formed on his cheek.

“I believe in you. I can only pray someday you can look at me and say the same thing.”

It takes an average of $1,000 to rehabilitate a horse that suffers from the ravages of neglect. Please don’t just watch. Every donation is treasured. Will you reach into your pocket to help? Donate now to save the life of a horse.