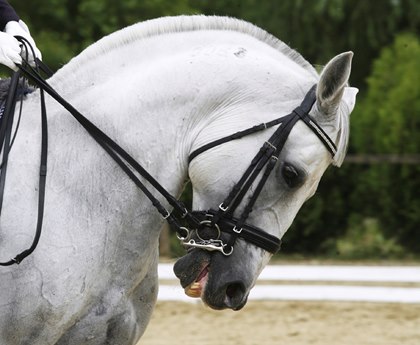 Hyperflexion—a position in which a horse’s nose is behind the vertical—became a welfare focus in the 1990s. Over the years it has grown increasingly common to see elite dressage horses performing in this head and neck position. And today, the Federation Equestre Internationale (FEI) has rules against hyperflexion, citing that it’s “mental abuse” to the horse and “a result of aggressive riding.”

To determine whether the negative effects outweigh the positive, Uta Koenig von Borstel, PhD, BSc, a professor at the University of Gottingen’s Department of Animal Breeding and Genetics, in Germany, carried out a review of the existing scientific literature on the topic. Co-author Paul McGreevy, BVSc, PhD, MRCVS, MACVS (Animal Welfare), Cert CABC, animal behavior and welfare science professor at the University of Sydney, presented the results on her behalf at the 11th International Society of Equitation Science (ISES) Conference, held Aug. 6-9 in Vancouver, British Columbia.

The team looked at 55 scientific articles dealing with the effects of head and neck position (HNP) on various types of horses’ welfare and/or performance. Of those studies, 88% indicated that a hyperflexed HNP negatively impacts welfare via airway obstruction, pathological changes in the neck structure, impaired forward vision, stress, and pain. Only one study (1.8%) suggested a positive effect on welfare: reduced stress as measured by heart rate variability after training. Koenig von Borstel cautioned, however, that this particular study had several confounding factors that could make its results less reliable.