(July 25, 2013)—As part of its efforts to end the abuse of Tennessee walking horses and encourage more humane, “sound” competition with the breed, The Humane Society of the United States has become a corporate sponsor of the World Versatility Show operated by the Tennessee Walking Horse Breeders and Exhibitors Association. The HSUS will also staff an information booth at the show, which will be held July 25-27 in the Miller Coliseum in Murfreesboro, Tenn.

The HSUS has long been an advocate for change in the competitive use of Tennessee walking horses, specifically calling for an end to the abusive practice of horse “soring” used to inflict pain on the horses to create the unnatural, high-stepping gait rewarded in performance show rings, known as the “Big Lick.” 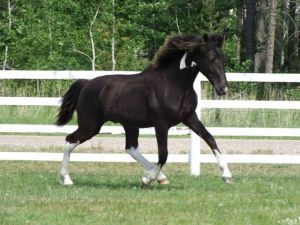 Keith Dane, director of equine protection for The HSUS, said: “This is the first time that we have sponsored a Tennessee walking horse show, and it is indicative of our commitment to helping the breed overcome the negative stigma that it has been saddled with for decades. The Tennessee walking horses that are rewarded at the World Versatility Show exemplify the breed’s natural gait and its versatility, intelligence and athleticism. They are the show horses of the future, once the abuses and trappings associated with the past have been eliminated.”

The HSUS also applauds the Tennessee Walking Horse Breeders and Exhibitors Association for using a U.S. Department of Agriculture-certified inspection program that will enforce the uniform mandatory penalties incorporated in 2012 into the federal Horse Protection Act regulations. Programs that refuse to adopt the mandatory penalties—including SHOW, the inspection program initiated and used by the Tennessee Walking Horse National Celebration—have been advised by the government that they face decertification.

The HSUS offers a reward of up to $10,000 for information leading to the arrest and conviction of any violator of the Horse Protection Act or any state law which prohibits soring. Anyone with information on this cruel practice should call 855-NO-SORING (855-667-6746) or email equineprotection@humanesociety.org.
In 2011 The HSUS conducted an undercover investigation into the Tennessee stable of World Grand Champion trainer Jackie McConnell, leading to federal and state prosecutions and the stiffest penalties to date for the practice of soring. Footage of the abuse inflicted upon horses during the investigation was aired on national television in May 2012 by ABC’s Nightline, sparking national outrage, and condemnation of the practice of soring by the American Association of Equine Practitioners (AAEP).
H.R. 1518, the Prevent All Soring Tactics (PAST) Act of 2013, was introduced by lead sponsors U.S. Reps. Ed Whitfield, R-Ky., and Steve Cohen, D-Tenn., to strengthen the Horse Protection Act by ending industry self-policing, stepping up penalties, and banning “stacks” and action devices often used in the practice of soring.