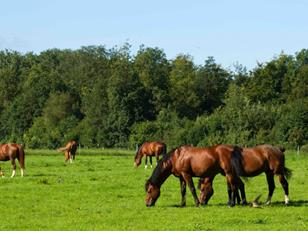 (Note – Reports from Off Family Farms are that 75 to 100 horses were killed by the storm. – Jerry) 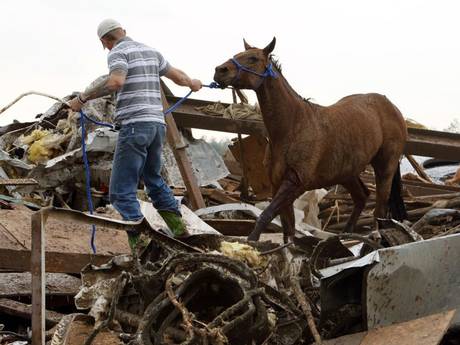 MOORE, Okla. (KFOR) — When the massive tornado hit Moore, Okla., Monday, some weren’t able to make it to their basements.

One man was on a family farm at the time, noticed the wind pick up and walked outside to see debris flying, according to KFOR.

Lando Hite was shirtless and muddy all over as he described what happened at horse and entertainment farm before he took refuge in a horse stall.

“It was just like the movie ‘Twister,’ ” he told CNN affiliate KFOR. “There were horses and stuff flying around everywhere.”

The tornado slammed into the Orr Family Farm, which had about 80 horses. It damaged several barns; Hite was worried most of the animals were killed.

“I tried to let some of the horses out of their stalls so that they would have a chance,” said the worker, who said the building he was in was moved about 100 feet.

He said he then hid in the stall, and the walls collapsed on top of him.

MSNBC – In addition to the rising number of souls lost in Moore, Oklahoma, the twister has also taken its toll on the town’s animals. According to sources, an estimated 75 to 100 horses were killed in Monday’s tornado when the Orr Family Farm took a direct hit. There’s been an outpouring of support on the farm’s Facebook page, where staff have announced that while those who work on the farm are safe and unharmed, it’s sustained an “extreme amount” of damage. They’re still assessing how the devastating tornado has affected both their property and their other surviving animals.