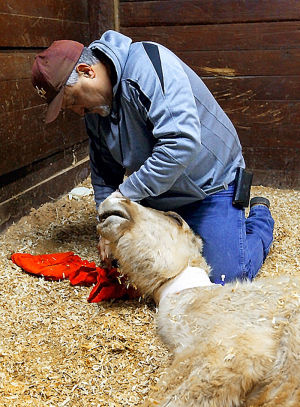 The court hearing on the abused horses from Texas City was held this morning. Jerry Finch, President of Habitat for Horses, was there championing for justice for the two horses that starved to death and the other three surviving abused horses. The three surviving horses were awarded to us, Habitat for Horses, where we will rehabilitate them so loving families can be found for them. Criminal charges have been filed on the owner. You too can Be A Champion to these horses by donating what you are able for their food and care: Click Here to Donate Now. ~ HfH 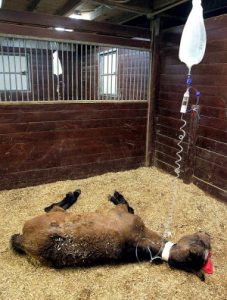 The palomino and a young by mare have died of complications from starvation, veterinarian Michelle Milton said. Photo by Kevin Cox

A young bay mare died Saturday morning, and a palomino mare was humanly euthanized Monday morning after suffering from anemia, said Michelle Milton, one of the veterinarians treating the horses.

Both horses died because of complications from starvation, Milton said.

The two horses, only about 1 1⁄2 to 2 years old, were so malnourished they had to be carried out on sleds and taken to equine veterinarians in Santa Fe for treatment Jan. 7 when Texas City police took them and three other horses from a stable in the 800 block of North Orchid.

A hearing to determine who will be awarded custody of the remaining three horses is set for 9 a.m. today before Justice of Peace Darrell Apffel at the Galveston County Annex, 2516 Texas Ave., in Texas City.

Both mares were about 350 pounds underweight and suffering from low body temperature, among other issues, when they were taken to Santa Fe Equine Associates.

Initially, the mares were doing better and seemed to be recovering. The palomino mare was standing on her own last week, while the bay mare had gotten up for a short period only a day after being seized. But veterinarians cautioned much could still go wrong.

“When they come in as sick as they were, it’s a long process to try to get them back to health,” Milton said. 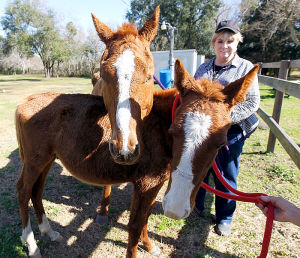 Two of the surviving horses with Carole Anne Pujazon, Volunteer Coordinator for Habitat for Horses

The two were so sick they could not immediately be fed grain like normal horses, she said. They had to be slowly fed hay before moving on to other feed, she said.

“Unfortunately, their bodies just couldn’t handle being re-fed,” she said. “That’s not uncommon with horses that have been starved to the point of near death.”

It can take a horse about a week to starve to death if it gets no grass, hay or feed. The two mares probably had some grass or low quality hay and had taken months to get into the condition they were found in last week, Milton said.

If the two horses hadn’t been brought in for medical care last Tuesday, they would have died that night, she said.

“I really thought we were going to have better luck with them because they fought so hard,” Milton said.

The remaining three horses were taken to the Habitat for Horses facility in Hitchcock. Those horses, two sorrels and a miniature horse, were doing well, said Susan Moore, the lead investigator for Habitat for Horses.

Habitat for Horses was tipped off about the condition the horses were in last week. The rescue organization contacted the Texas City Police Department. The department has launched an investigation and last week interviewed a suspect.

No charges have been filed, but last week officers said progress was being made in the investigation.
Milton said she was devastated by the death of the two young mares.

“You know you get so attached to the really sick ones — a lot of nights together, just us,” Milton said. “They were sweet girls. I’m sorry they didn’t get a better chance at life.”

At a glance
WHAT: Court hearing to determine who will be awarded custody of the remaining three horses seized Jan. 7 from a West Texas City stable
WHEN: 9 a.m. today.
WHERE: Justice of Peace Darrell Apffel’s courtroom at the Galveston County Annex, 2516 Texas Ave., in Texas City

How to help
Donations are being accepted by Habitat for Horses to help cover the cost of the horses’ care. Call 409-935-0277.