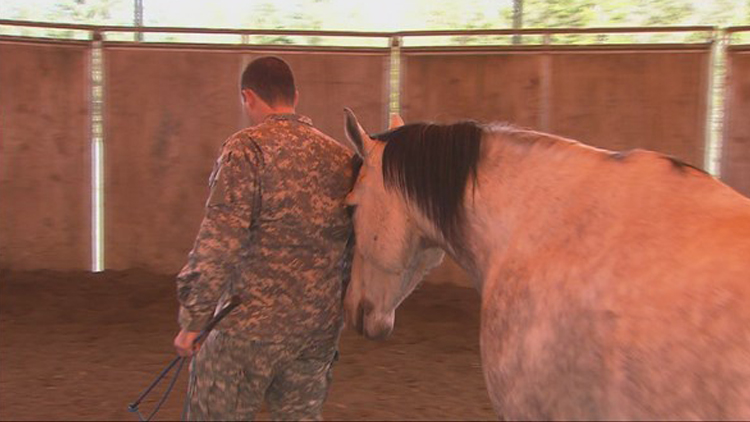 “A traumatized soldier may go to a doctor, a psychiatrist, and a pharmacist. But his best move might be to go see a horse.”

RAINIER, WASH. – A traumatized soldier may go to a doctor, a psychiatrist, and a pharmacist. But his best move might be to go see a horse.

Richard Carson is a U.S. Army medic who was injured in Afghanistan on a routine patrol. That explosion cost Richard’s buddy his life and put Richard in a wheelchair. Injuries to his hands and legs left him unable to walk and kept him in the hospital for three months. With all of his energy going toward healing his body, Richard brushed aside the mental wounds. He was never officially diagnosed with Post-Traumatic Stress Disorder.

“Would tell them I was doing great all the time regardless whether I had stuff goin’ on or not,” said Richard. “I just didn’t really wanna talk to them.”

And 11-year-old quarter horse named Justice wasn’t exactly what the doctor ordered. But he was just what Richard needed.

When Richard started classes at Rainier Therapeutic Riding, he was still in his wheelchair. Now, he’s in the advanced class and regularly volunteers with the program, which was founded by husband and wife team Debbi Fisher and Bob Woelk. Debbi’s son is in the Marines and her daughter is in the Air Force. So all soldiers are like family to her. She sensed that horses could help the healing.

You might think to compare these horses to therapy dogs, but they’re actually quite different. Horses, unlike therapy dogs, are not naturally calm creatures. They’re reactive and skittish, easy frightened. Through teaching these often anxious animals to use the thinking sides of their brains, instead of being reactive, soldiers with PTSD are actually teaching themselves how to calm down.

“It just helps you begin to trust…put trust in other…y’know, at first just a horse, but then other people as well in the future,” says Richard.