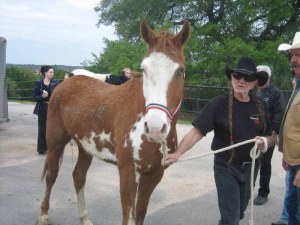 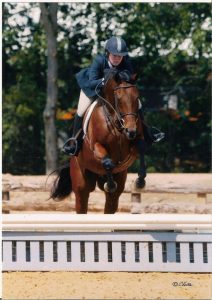 When the horse finally has a body score of 3.5 to 4, it’s time to start a true evaluation of its training. Once the effects of starvation have declined and the horse is feeling better, both physically and mentally, you will know only a couple of things about its true talent – that it’s calm or it’s wild. Starvation can have a powerful effect on the mental health of horses. They can be either be very forgiving and place full trust in those that have healed them, or they can carry the distrust of humans around for the rest of their lives. Normally, we have no knowledge of the occurrences in a horse’s life before they came through our gates. We’re taken in horses that have had a lot of excellent training in hunter/jumper skills, barrel racers, cutting horses and those who are easy riders on the trail. How they end up in the situations they do is a mystery, but the fact remains that until the evaluation starts, the skills are completely unknown, and might remain unknown until a skilled trainer puts them through a few paces.

Prior to any introduction of physical exercise, it’s best to have a vet do a brief exam to determine any lingering effects of the starvation, such as heart murmurs. Sudden exercise in horses, just as in humans, can cause death, so take it slow and easy, just as you would if you had been through the same experience yourself. A few turns in the round pen should be enough the first few days, slowly increasing the exercise time as the days pass, just as you did while refeeding. There is no reason to rush. Without rebuilding the muscles, the horse is in the same shape as a couch potato, with the same dangers of blood clots and heart attacks. 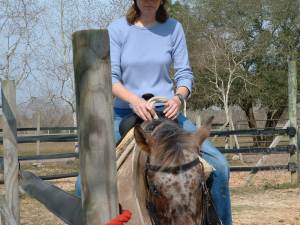 The evaluation needs to be honest. Pushing a horse into the “ridable” list when there are riding issues is doing more harm than you might realize. Far too often, those horses classified as, “Good for children or therapy programs” are past the point where they need anyone on their back. Be they crippled, weak, half blind, too spooky or for whatever reason you honestly feel they should not be ridden, let them just be a horse. Some folks say that all horses need jobs, but before the BLM decided to turn the west into cattle country there were thousands of horses that enjoyed a good life walking around the wilderness grazing and sleeping. If your newly rehabbed horse need to spend his days munching hay and drinking water, let him.

Naturally, finding an adopter for non riding horses is almost impossible. They exist, and I love each one of them. Occasionally someone will come to the ranch and, being very up front, say that they only want a few horses so they can watch them graze. That’s the perfect adopter for about 50% of the horses at the ranch. As of the day I’m writing this, Willie Nelson has 73 of our guys at his ranch, and I praise him for taking them under his wings.

The first few times in the round pen has nothing to do with training. It’s pure evaluation time. To start, look for the obvious signs of training. Is he easy to halter or does he toss his head and avoid you at all cost? He might be trained, but if he had ear problems when you brought him in, such as mites or ticks, he could be trained but scared of more pain. If he lowers his head for you when you approach with a halter, you know he has something going for him. Are there signs of aggression, like trying to swing his butt to you, ears pinned back? That could mean that either there is little to no training, or he was treated very harshly before he came to you. Does the horse stand still when you approach, or turn to constantly keep an eye on you? Does he try to escape? Is he better with a woman than a man?

The variations are endless, but by watching very closely you’ll notice the signs of previous training that will tell you what to expect when the horse has a saddle on his back. Again, go slow. You want this experience to be good for the horse. If there was abuse, it probably happened in this same situation, and those memories are very real in the horse’s heart. Just as you held him when he first came in, this is the time to be soft and gentle as well.

Important: You cannot learn to train a horse by watching RFDTV or by buying the 20 DVD’s and special bridle for $429.95 from the latest “gentle training” guru. If you don’t know how to train, don’t do it. Even the best horse can get screwed up by a know-it-all supposed trainer. No one learned to ride a bike by reading a book. If training is really something you want to do, then study under a real trainer.

My profession is equine physical and mental rehabilitation and I’m the first to admit that I don’t know the first thing about training. That is an entirely different profession and that professional is who I want in the round pen with the rehabbed horse that I spent six months rebuilding. A good trainer is a treasure. If you have one, hold on to him/her and keep them happy.

Is he potty trained? 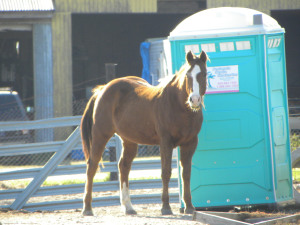 One hard, fast rule we have at the ranch is that under no circumstances will there ever be any screaming, angry outburst, nor will a horse ever be struck in anger. When you get to the point that anger and frustration become that strong, it’s time to walk away. Gentle training is the only acceptable method we use, and it’s proven itself time and again. The days of beating as a training method are long over, but it still exists in those who refuse to change or recognize the difference. The senseless feeling of power over a living creature is slowly being replaced by the feeling of mutual respect born out of gentle training.

That first ride is a big day, and you need a very experienced rider to swing the first boot over the back of the horse. One horse that we rehabilitated at the ranch acted totally at ease as we slipped on the saddle. Nothing happened when we tightened the girth and he was as calm as could be when he was mounted. We walked him first, someone holding the lead rope, as the person in the saddle tried neck reining. He seemed to understand and respond to the pressure, so we unclipped the lead rope. One little click and the horse went ballistic, throwing the rider far over his head. The final analysis was that the horse was untrained, but trusted us enough to saddle and mount. When the lead rope was unhooked and the person in front of the horse walked away, there was suddenly the realization that a monster was on his back. Again, you never know.

A good trainer can evaluate gait, ability, softness and a dozen other things that some folks think important, but the whole scope of knowledge about the horse adds to the adoptability. Is he good with trailer loading, receiving shots, hoof care, washing? We like to give our guys an “A-F” grade, just like in school, that way we can inform the possible adopter if there are issues.

Beyond evaluating the horse, the adopter must also be evaluated. Too many people think they “know” horses when in reality that don’t have any idea what a complex animal they have. Horses will test their limits, almost on a daily basis and if they find a weakness in their human, they will take advantage. That’s one of the biggest reasons adopters end up sending horses back to the ranch – they showed fear or became intimidated and the horse started taking over. I’ve seen adopters in tears when they come to the ranch with their once perfect horse who “suddenly turned aggressive.” Within five minutes back in the hands of one of the ranch workers and the horse is back being as calm as the day he left.

All of that speaks to the confidence one has with their relationship with the horse. Absolutely he can be your best friend, but he also needs to know that you are his leader and that you will protect him. You are his alpha, the leader of his herd. Show that, be that, feel that, and you have a relationship that goes beyond any measure.

I hope “Horse Rescue 101″ has offered a small bit of knowledge about what we do on a daily basis. Horse Rescue 102 might be coming, so make suggestions about what you would like to learn (or just to listen to me rattle on about). However, your tuition is due. You have a choice of either pressing that “LIKE” button over on the side –> or donating a million dollars, which ever is easiest.

And yes, I’m still waiting for Sandra Bullock’s check. Last I heard, she said it would be a cold day in someplace. We were disconnected before I heard the rest of it,