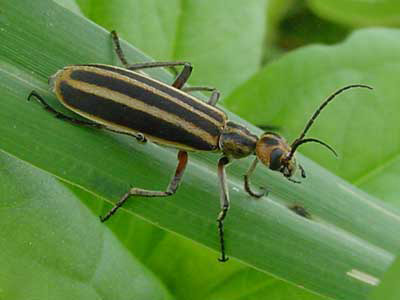 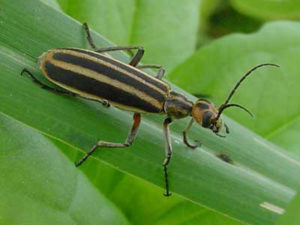 COLUMBIA, Mo. – Striped blister beetles, which can be toxic to horses, are being seen in high numbers in alfalfa in some areas of the state, according to University of Missouri Extension entomologist Wayne Bailey.

The beetles produce a compound called cantharidin, which remains toxic in alfalfa hay for at least four to five years after harvesting. Adult beetles generally do not appear in the first cutting of alfalfa. Risk exists mostly in second and third cuttings.

Beetles appear in alfalfa, soybean and weed patches in July and August after emerging from the soil. They range in length from a half-inch to an inch and are easily recognized by their characteristic stripes and prominent “neck.”
Bailey said striped blister beetle problems appear following years with large numbers of grasshoppers. This happens because at an immature stage the beetles feed on grasshopper egg pods in the soil.

They move quickly in packs to protect themselves and to mate and drop to the ground as a protective behavior when threatened.

Striped blister beetles move quickly between fields of soybean and alfalfa, so farmers and horse owners are urged to scout alfalfa frequently to determine pest numbers, Bailey said. Damage to alfalfa is minimal, but risk to horses increases when large numbers of beetles are found in small areas of a field.

The insects have earned their name because they can cause blisters on the skin of humans and in the mouths of animals.

The oily, caustic cantharidin in striped blister beetles can cause animals to become sick or die, and Bailey said studies indicate that consumption of as few as 25 beetles in a 24-hour period can be lethal, depending on the size of the horse.

Signs of poisoning vary, said Tim Evans, a veterinary toxicologist with the MU College of Veterinary Medicine. Signs include sores on the mouth and tongue and abnormal breathing with jerking of the diaphragm.
Horses may try to relieve the burning sensation by putting their muzzle and lips in water and blowing bubbles in the water. They also may paw and stretch to reduce abdominal discomfort.

In addition, urine may be blood-tinged and diarrhea may contain blood, mucus or sloughed intestinal lining.
Horse owners who see signs of poisoning should consult a veterinarian and quit feeding the hay immediately, Evans said. A veterinarian can correct electrolyte abnormalities, provide supportive care and help reduce pain.
Crushed beetles are unevenly distributed through contaminated hay, and two animals can eat from the same bale with one becoming poisoned and the other unaffected, Evans said. 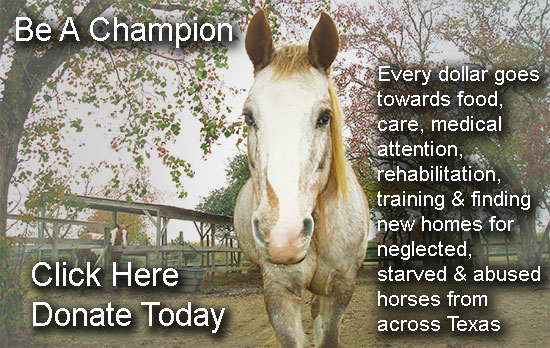