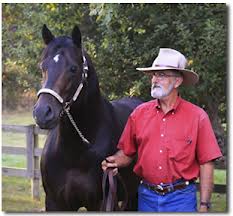 DICKINSON, Texas (AP) — A grassy lawn under a few shade trees is not the ideal place to amputate a horse’s leg. 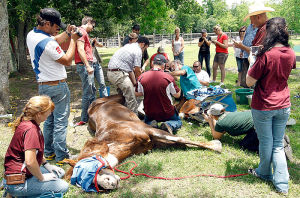 Dr. Ric Redden, a world-renowned veterinarian who has specialized on horse’s feet, knew this, but he also knew that you do what you can with what you have.

“A lot of things can happen,” Redden said. “But if you worry about all the things that can go wrong, you’d never get started.”

In the middle of the group was Redden, in a blue scrubs top and Wrangler jeans, and nearby was a 16-year-old quarter horse named Indio.

The stallion was a bit woozy and unstable — from the drugs and from the fact that he was missing his back left hoof and part of his leg. In its place was a black cast.

The horse was only moments from going to the ground, and Redden wanted all those who were there to watch and help to know the ground rules.

Once the procedure started, he wanted everyone to be completely quiet, he said.

No side conversations or chatting.

“I want to be totally concentrated on what I’m doing,” Redden said.

The horse, Indio, had kicked through a stall wall weeks before and severely damaged his left rear leg. The hoof was already gone, and Indio was walking on a cast.

Redden said he planned to remove one of the lower leg bones, possibly take a piece of a healthy hoof frog, the piece of the hoof that acts as a cushion and shock absorber, to graft onto the remaining stump and then drill two pins into the cannon bone that the cast, and then the prosthetic leg, will be built around.

But Redden knew that once the cast came off, there were plenty of things that could go wrong.

This was the 55th time in his nearly 40-year career that he would perform this type of operation, he said. When he first started attaching prosthetics to horses, he was one of the pioneers in the field. Many of the techniques and tools used, Redden invented and modified.

He started working with horses as a farrier, changing the shoes on his own horse when he didn’t have the money to hire someone else. He would eventually work his way through veterinary school as a farrier. Based out of his practice in Kentucky, Redden has traveled the world working on horses’ feet and has written a book on laminitis in horses.

Before the operation begins, the gauze, scalpels, drills and various other tools are laid out on tables.

“Think fast but move slow,” he tells the group of veterinarians and students who will be helping. “Because if you really get in a hurry doing this stuff, sometimes it can get real hairy. I can tell you some real hairy stories.”