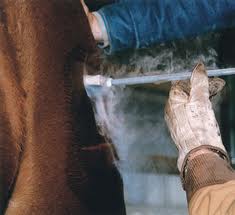 We’ve all watched the classic movie scene — a cowboy lassos a young colt, wrangles it to the ground and sears his ranch’s brand on the animal’s shank. It’s a common practice, but animal rights activists have long argued the practice is cruel. New research appears to support that claim.

A study published in last month’s issue of The Veterinary Journal found that branding with hot irons subjects some horses to third-degree burns. It’s the first detailed study on tissue lesions caused by the common practice.

“Despite the fact that hot iron branding caused lesions compatible with third degree thermal injury, it did not allow unambiguous identification of a large proportion of older horses,” concluded authors Jörg Aurich and Christine Aurich of the University of Veterinary Medicine, Vienna, and their colleagues.

“Branding is clearly associated with local tissue damage and the markings are often insufficiently clear to be decoded, even by experienced observers or after the horse has died,” Jörg Aurich further said. “There really isn’t any reason to continue to mark horses in this outdated way.”

For the study, the researchers examined not just the skin surface area affected by the marking, but also tissue layers underlying the mark. They determined that, out of 28 horses, tissue damage was severe in 8 and consistent with a third-degree burn. Damage was moderate in 9 of the horses, mild in 5, and absent in 6 out of the 28.

The scientists next analyzed the readability of branding symbols in another 248 horses participating in an equestrian championship. Three independent investigators were asked to read the double-digit branding number on each horse. The investigators failed over 60 percent of the time.

Horse identification is required for breeding programs, for disease control purposes, and to prevent substitution in competitions or sales. Many countries and U.S. states require branding with hot irons.

For example, the Administrative Rules of Montana include this passage: “Under the brand laws of the state, with the following exceptions only hot iron brands will be recognized by the Department of Livestock, Brands Enforcement Division on all livestock for sheep, goats and swine and with the exception that freeze brands may be applied to horses, mules or asses.”

Freeze branding utilizes a super cold iron that, when used properly, destroys the animal’s pigment-producing hair color follicles. The method is thought to be less painful than hot iron branding, but not all states recognize the practice and it can be more expensive.

Hot iron branding continues to be a standard marking method, and not just for horses.

In Oregon, sea lions have been branded with hot irons since 1977, as part of a general population study.  In Oregon and Washington, the Departments of Fish and Wildlife are authorized to euthanize up to 92 sea lions a year, largely to prevent them from feeding on wild fish listed under the Endangered Species Act.

Andrew Trites and Kristen Walker of the University of British Columbia are involved in ongoing studies to help determine how hot iron branding affects sea lions and other animals. They indicate that the future of branding for horses, sea lions and more should involve compromise and collaboration between animal advocates and local officials. “Conservation and the welfare of animals must go hand in hand,” Trites said.