Hoof Prints in the Sand

Habitat For Horses / horse advocacy  / Hoof Prints in the Sand
1

Hoof Prints in the Sand 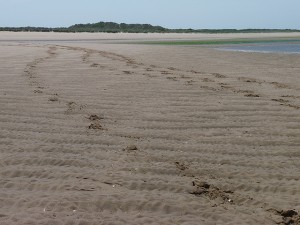 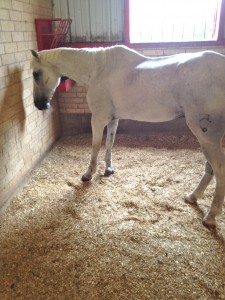 Like car wrecks and calls from Aunt Bertha, they seem to come in groups of threes; unrelated, from different places, yet they share the same physical problems. Yesterday it was leg injuries, severe enough that normally they would have been euthanized. Except for the very rare prosthetic device, a horse without a functioning leg doesn’t have much of a chance in this world, so why, one would rightfully ask, would we travel around the state picking these three up? Because they needed a glimmer of hope, even if it was from gray-headed old guy in a pickup truck and a long trailer.

The Deputy helped load the first two. Both of them had been dumped beside the road – different places and different dates. For the sake of your sanity I won’t dwell on the mental health of horse owners that would act like this, but I would imagine that your thoughts would pretty much reflect mine. 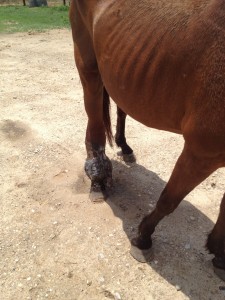 Case number one no doubt started out as a small scratch that was left untreated. I’ve preached a million times about taking care of small wounds and seeking the advice of a vet if it doesn’t heal. “Proud flesh” is nothing more than the formation of granulation tissue, an attempt by the body to heal itself. The internet is filled with medical information on the proper treatment, but some folks just sit in ignorance rather than put forth the effort to learn, and this is the result.

The next young man, a gray Arabian gelding, could barely get into the trailer. A short time later we were at the Elgin Animal Hospital listening to the vet say, “We’ll put him on the operating table and open it up to see exactly what we have. Of course, we’ll try to fix whatever it is, but understand that if we can’t, the best alternative will be to euthanize him.” I was okay with that. All I wanted was to give him a chance and Elgin was the best place in the world for doing just that. (Next to our vet, Dennis Jenkins, but he doesn’t have the operating table.)

“While you’re here, would you take a look at Jarad?” the vet asked. “He was hit by a car, the driver didn’t stop and no one has come forth to claim him.” 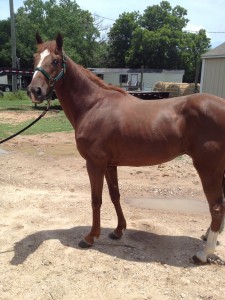 Jarad turned out to be a handsome young stud with a whole lot of cuts, scrapes and an injured leg encased in bandages. Just like clockwork, leg problem three became part of Habitat for Horses. In a few minutes, he jumped in the trailer and started attacking the hay bag, ready for the ride back to the ranch.

An update on the neverending story about the search for a place in the US where horses can be slaughtered: On June 19th, Rep. Jim Moran’s amendment to the House version of the Agricultural Appropriations bill passed, meaning that it was attached to the current bill. If maintained, this would once again put into place the ban on Federal Inspectors wandering around horse slaughterhouses sipping coffee and joking with the killer-buyers. While a lot of folks got excited about this, we’ve been down this road many times before. Something in the House that is good can turn bad real fast when money is involved.

Your tax dollars would have payed for the Federal Inspectors so the foreign meat companies can make money from tainted meat. That sounds as illogical as Aunt Bertha’s phone calls, but since we’re talking about our beloved Government, put intelligence aside for a moment.

The House Appropriations bill goes to the floor for a vote on June 26th. It then goes to the Senate, then the collection of those two goes into a committee to work out the differences. This is where wonderful folks like Senator Burns slipped in an amendment that destroyed the essence of the Wild Horse and Burro Act and allowed all those laughing killer-buyers to gobble up all the ten year and older wild horses, plus those that have been to auction three times, and send them to their death in Mexico and Canada.

Rep. Moran did good. So have any number of other Reps and Senators in trying to get the American Horse Slaughter Prevention Act passed, but after umpteen years it still sits in a file folder in some musty file cabinet in DC, because there is a very big industry and a lot of money behind killing horses for profit.

Being an election year, who exactly gets the ears of politicians – the voice crying out to save the heart of America or the contribution of $500,000 from the suits in the horse industry?

Back on the ranch, I just received a call from Elgin Vet Hospital – the gray gelding came out of surgery, the operation was a success, he’s standing on his foot and happily enjoying his new life. I’ll pick him up in a couple of weeks.

Where do the hoof prints in the sand lead you? It’s a question we all must answer in the quiet of our soul. To see the beauty of that which stands before us, or to ignore what God has shared?

A fist pump and a slap on the back feels good, but it doesn’t help feed the horses. Add your financial support by donating to Habitat for Horses. Let’s do this together.