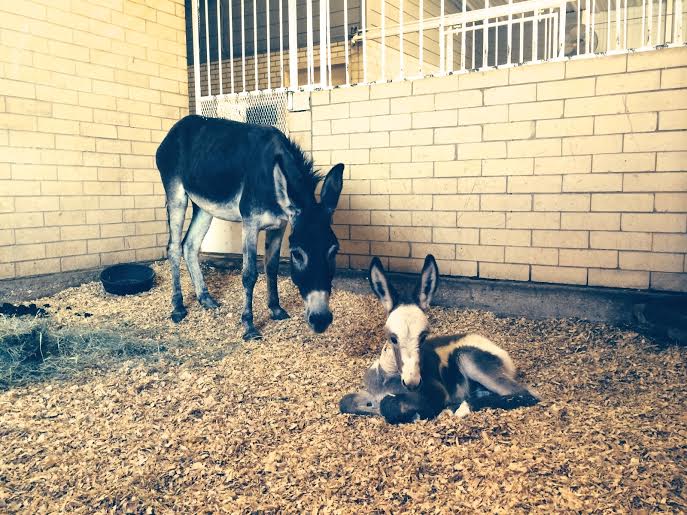 His mom was found wandering the streets and picked up by the Travis County Sheriff’s Office, Starved, rejected by whomever supposedly owned her, she was lucky enough to be held by one of the best large animal law enforcement agencies in the State of Texas, and one of the most caring.

Baby Hollis and his Mom

Hay, feed, water, the essentials of life were finally available to her, and just in time. Two weeks later she delivered a baby, a seemingly perfect donkey. The Deputies  chose to name the baby donkey “Hollis” after Travis County Senior Deputy Jessica Hollis who passed away while checking the low water crossing in Austin after a severe storm. For the baby, it’s a big honor to carry her name forward, and a big responsibility.

But now Hollis is fighting for his life. The eighth day after he was born, Hollis was rushed to the vet hospital because he was having trouble breathing. The doctors found a mass is his throat, obstructing his airway, a mass that was just on the verge of blocking it entirely. Rushed into the operating room, the vets performed an emergency tracheotomy, allowing him to once again bring fresh air back into his lungs.

The temporary fix was successful. Within hours Hollis was in a stall, back with his mom and the vets were on the phone to Habitat for Horses. The problem was two fold – to remove the mass would take equipment that was only available at the Large Animal Hospital at Texas A&M. Secondly, would we pick up the tab?

There was no other alternative. Hollis’s life depended on a nod from us. Of course, you know what we answered. The life of a baby, just days old – with tears I said yes. Whatever it took, count on us. I told them.

Early this morning, the Deputy picked up both the momma and Hollis at the vet hospital and drove them to A&M in College Station They are as emotionally involved as the vets. This little guy, named after one of their own, needs to survive, and he will if everything works out. At this point, we can only pray.

Hollis at Texas A&M. The operation to remove the mass in his throat and save his life will happen this Wednesday.

The operation will be done Wednesday morning. Laser surgery to remove the mass, nothing unusual and no, cancer is not suspected. It’s a little birth defect, the doctor said. There are other things, a little infection, inflamed tissue, and several days of recovery before we know for sure that he is going to pull through. Maybe, the doctor said, by Monday of next week. Maybe.

Texas A & M is donating their services but yes, it will cost money – money that we don’t really have, but when we all pull together miracles can happen. That’s why I said yes, because I know that’s what you would want me to say. We can do this, we can cover the costs, we can pray together, we can give Hollis a chance at life.

Will you help? For Hollis, for all the horses and donkeys that turn to us for help, will you click on the donate button? They need us to say, “Yes, you can count on me.”