Fireworks to blame for death of Milton horse

Fireworks to blame for death of Milton horse 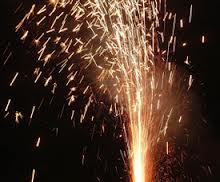 Fireworks are being blamed for the death of a horse in Milton, and one owner is pushing for a new law to make sure it doesn’t happen again.

He’s calling it Liberty’s Law, named after his current horse he said has suffered years of abuse from neighbors, including the use of fireworks.

Horse owner Tim Enloe said Liberty used to roam the pasture night and day, but now she spends nearly all of her time in the garage right next to the house.

“She’s going to be scared for the rest of her life on the very property she took her first breath at because of abuses by some local kids,” said Enloe.

Abuse he said he has video of everything from kids yelling at her to fireworks found in the pasture where she should be grazing.

And that’s just his horse.

Just a few weeks ago, on the Fourth of July, a horse in the same community was spooked so badly inside its barn that it ran into a wall and broke its own neck.

It’s something Enloe said Liberty’s Law possibly could have prevented.

“If Liberty’s Law had been presented and enforced, who’s to say that the horse who died recently might still be alive,” said Enloe.

Liberty’s Law aims to punish those committing abuse and educate the community on how to act around horses.

Enloe said he’s tried to present his ideas to the city but claims he’s been blocked. CONTINUED... Read more of this article and watch the Video – CLICK HERE

To learn more about Liberty’s Law and to sign a petition to show support, go to http://libertyslaw.blogspot.com

Habitat for Horses is a 501.c.3 nonprofit equine protection organization supported solely by donations. As of today, we have 175 donkeys and horses under our care, plus one ornery, old mule. Most of them are here because law enforcement removed them from their previous owner. Our ability to rehabilitate and rehome them comes from the financial support of people like you. Please support us by making a donation for the horses we all serve. Click HERE to donate