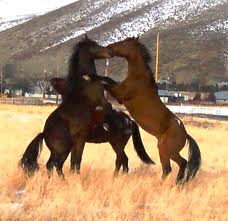 (Interesting debate. While I disagree with her final analysis, it adds fuel to the fire of wild vs. feral. If horses are indeed native, they should not be removed from National Parks. If they are feral, then they should be removed, according to the BLM and various state officials, because of the competition with “native” species. – Jerry) 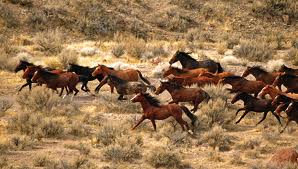 The question of whether mustangs in the West are feral versus wild is a controversial one; it’s got a knack for appearing in the comment section of many a mustang story. Mustang advocates are adamant the wild horse is a bona fide North American wildlife species – on par with deer, elk, bison and pronghorn. Scientists, ever the party poopers, beg to differ.

Horse evolution is well documented in North America’s fossil record – first as a small dog-sized animal that walked on five toes over 50 million years ago, on to larger equines that bore their weight on single hooves. Horses went extinct on North America some 12,000 years ago – likely due to some cocktail of climate change and overhunting by man – but not before they migrated over the land bridge into Asia (where they further diversified into asses and zebras).

Despite their extinction on North America, horses guaranteed themselves a permanent spot in history when humans domesticated them some 4,000-5,000 years ago on the Asian steppes (possibly earlier). A partnership was born, and equines became a catalyst for human migration (and war).

Once domesticated, horses carried Gengis Khan’s empire into power. They were painted by Egyptians, Romans and Greeks. They bore the weight of the Crusaders on their backs (nobody said being friends with humans was easy). And 500 years ago, Spanish conquistadors couriered horses back to their evolutionary homeland aboard ships. Some escaped and became the seed stock for what would become a burgeoning wild horse population.

But are the horses here today the same animals that left 12,000 years ago? That is, how much did horses change in the 4,000-5,000 years since they were domesticated?

In wild species, nature selects for traits that best equip an animal for survival. But when humans are involved, we select for traits that meet our needs – a practice dubbed selective breeding. A new study in Nature suggests that by domesticating animals (dogs, in this case), we actually cause changes in their genetic hardwiring.