Feather and Lauren: A Case Study

Feather and Lauren: A Case Study 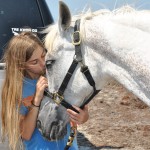 Why Choose a Rescue Horse?

In the summer of 2007, 4 pasture mates were found in an area of the beautiful and peaceful landscape of the Texas Hill Country. But what was going on there was not so beautiful or peaceful… 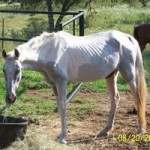 The 3 horses and 1 donkey were being starved. One of the horses, an older mare named Feather had her feet chained together so she couldn’t wander…there to stand and starve to death.

When local authorities along with HfH seized the horses, Feather had a body score of 1.5…one of the lowest scores you can have and still be standing. During the course of her recovery, she had a few colic scares while food was being re-introduced at her foster home. Thankfully, she pulled through and was moved onto a new foster home that specialized in training/evaluating. This move turned out to be the beginning of a new life.

In the summer of 2007 my daughter Lauren had been training in English for a while when a job opportunity moved us from my lifelong home of the Galveston Bay area of Texas to the Hill Country. Just before we found out we would be relocating, I had been looking on the HfH website hoping that one day we could own a horse. The trainers at the boarding/training facility recommended we NOT pursue a rescue horse (of course I didn’t listen!)

After our move, we began looking for a trainer that could continue Lauren’s training and hopefully help us find her first horse. After several attempts with other trainers, we were referred to a young man that had a boarding facility and was a riding instructor. Although his specialty was Western, he had recently begun working with kids riding English. We decided to give it a try. As soon as we stepped on the property and met him and his herd, we knew this was THE place; And to seal the deal, he mentioned he was a foster home and trainer for HfH!

After a few months of lessons, a new group of horses came to the barn…they were new HfH fosters! We immediately did all we could to help and one in particular caught our attention… 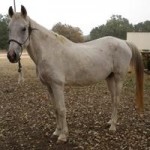 She was shy, quiet, unassuming…much like Lauren. She was the lowest in the herd pecking order and we always felt sorry for her. She didn’t seek our attention like some of the others, but there was something coming out of her heart that we felt. Although there was always an extra pile of hay for the game of “musical hay piles” that occurred at each feeding time, sometimes we would stay around and shoo the other horses away so she could eat in peace. As the days went on, we couldn’t stop thinking and talking about her, although the trainer felt she still needed some weight before she could be worked. We continued giving her special attention and secretly (to surprise Lauren) discussing that maybe we could ADOPT her!

Eventually she gained enough weight to begin evaluations. Lauren was one of the first to get on her. Although they were both nervous, they rode around for a bit and the trainer informed us that she would need some work. It was too late! We didn’t care what it would take…we just knew that there was something special between this horse and our family, and especially Lauren. In April 2008, we signed her adoption papers and kept it a secret from Lauren. 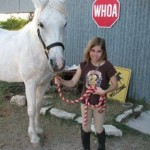 During our daughter’s next lesson, we asked her to bring Feather out of the pasture because she had been adopted. When Lauren walked up, she was holding back tears. As soon as she got close and saw me, she let them all out. (in an effort to throw her off course in case she has been listening to our adoption plans, we played a sneaky move and didn’t tell her WHO the adopter was!) As soon as I saw her sorrow at the possibility of losing Feather, I informed her “she was adopted by YOU!” The tears of sadness were immediately replaced with a smile and tears of pure happiness!

We are grateful to HfH for saving Feather, her pasture mates, and all the other horses whose lives they have touched. Feather still has both physical and mental scars from her ordeal. She has scars on the pastern area of her feet…reminders of the chains that bound her to a life of starvation and who knows what else. There is pain inside her that no matter how well we treat her, we know will never leave her mind…memories that are haunting to even imagine. Our only hope is that the new memories with our family and the pure unconditional love we have for her chips away at the memories of her past until eventually the good memories are all that remain. We can never imagine life without her. She has been a patient teacher both as a riding companion for Lauren as well as showing a “first horse” family the ins and outs of horse ownership. From the bottom of our hearts, we love you Feather and we are privileged to be a part of your new beginning…and thank you HfH for giving her the chance at a new life…