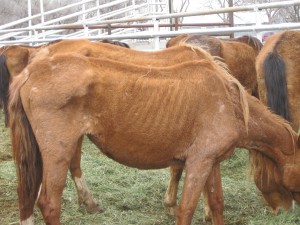 In May 2012 an informant contacted the Miller County, Ark., Sheriff’s Department to report suspected equine cruelty. During a subsequent investigation sheriff’s deputies discovered the skeletal remains of a horse. Apparently the animal had died after being tied to a tree and deprived of food or water for weeks. Following a full investigation authorities charged the horse’s owner with one count of felony animal cruelty and placed his remaining horse with a relative under monitored care. Miller County Sheriff’s Dept. Chief Deputy Duke Schofield says the incident is just one of many equine-related cruelty cases his department investigates routinely.

“People are very aware of animal welfare issues, and you’d be surprised how many horse-related calls we get every month,” he says. “We follow up on them all.”

Although the specific language of equine-related animal cruelty statutes varies from jurisdiction to jurisdiction, the word “neglect” generally refers to specific circumstances ranging from withholding food and water deliberately to failing to provide reasonable shelter and necessary veterinary, farrier, and other basic care. According to statutes in some locales, such neglect can also constitute animal cruelty. Physically injuring or killing a horse by beating, shooting, etc., is also considered cruelty under most animal welfare laws.

Local police or, as in Miller County, county sheriff’s department personnel carry out animal cruelty investigations. In some jurisdictions law enforcement agencies form contracts with humane organizations, such as reputable horse rescues or other animal welfare organizations, to assist with equine cruelty investigations. Schofield says officials investigate these cases in much the same way that authorities probe other criminal activity. That means investigators visit locations where the alleged cruelty or neglect has taken place, observe the animal and his environment, interview the animal’s owner, and interview witnesses separately, including (if possible) the informant who originally brought the suspected incident to light. If circumstances fall under provisions contained in local laws, law enforcement authorities can–with sufficient evidence–arrest and charge the allegedly errant owner with animal cruelty. Under appropriate circumstances law enforcement personnel can also assume custody of the animals and remove them from the owner’s property and care. The case then moves on to local or county prosecutors for trial. If convicted, the animal’s owner faces penalties dictated by the jurisdiction’s specific animal cruelty laws.

However they play out, animal cruelty cases can be time-consuming and expensive to investigate and prosecute. And because horses’ lives and humans’ livelihoods both hang in the balance, animal welfare advocates and law enforcement officials alike say it’s crucial that cruelty case investigators are well-prepared to do their jobs.

In 2007 equine investigations instructor Essie Rogers helped develop an equine cruelty investigations training course for Kentucky law enforcement personnel. The course covers animal cruelty investigation fundamentals, including how to interview owners, witnesses, and informants. Also, officers learn basic horse handing and responsible horse keeping methods. Equine-specific components of the course are critical because some law enforcement officers might be completely unfamiliar with horses and their care. Such is the case in some jurisdictions, Rogers says, and “you can’t investigate a horse cruelty case if you’re terrified of horses.”

Along with direction on safe horse handling techniques, including how to read equine body language, the course Rogers helped develop includes material on equine nutritional needs and appropriate feeding. Officers also learn to assess equine body condition using the Henneke body condition scale. Don Henneke, PhD, developed the scale in 1979 solely to determine the amount of fat present on a horse’s body. Scale values range from 1 to 9; horses with a score of 1 are deemed emaciated, and those with a score of 9 are considered extremely fat. Using the scale accurately requires examining the horse manually for fatty tissue present at specific locations on the animal’s body. It also requires experience.

Equine cruelty investigators have long used the Henneke scale while gathering evidence needed to seize horses legally from their allegedly neglectful owners. But the scoring system is just one tool investigators use to make a case, says Morgan Silver, a veteran equine cruelty case investigator and executive director of the Horse Protection Association of Florida. Notes Silver, humane officers work alongside veterinarians who examine animals for physical signs of emaciation or cruelty.

“This requires looking at a big picture–not only the horse’s surroundings but also a good physical exam,” says Marilyn ¬Maler, DVM, of Sun Spirit Farm and Veterinary Services, in Alachua, Fla., who assists Silver with cruelty cases. “This includes looking at the teeth, listening to the heart and lungs, and using bloodwork and fecal exams to rule out any other medical reason the horse would be thin.”

“Cruelty cases can be time-consuming because we want to make a good case,” Schofield says. “We want to do what’s right for the animals.”

She cites cases, for instance, in which horses are provided plenty of food, but because of health conditions preventing their bodies from digesting and absorbing that food optimally, they look very thin.

“Almost the biggest predictor (of true neglect) is to look around at the other horses,” she says. “If you have 10 thin horses on a property, fences falling down, and green water, there’s probably not a medical reason (for the horses body condition).”

Bloodwork can also indicate whether a horse is at such a severe stage of starvation that his body has started using its own muscle–including cardiac, liver, and kidney–to sustain itself.

Authorities also record allegedly maltreated animals’ condition with video or in still photographs they include in the evidence record. Investigators examine and record other evidence, including the presence or absence of food and water and shelter for the animals on the property in question.

It’s important to note that adequate feed supplies do not necessarily indicate horses are receiving appropriate care, says Silver. “I have seen the same bags of feed in one spot for months, hay in the barn, and none put out,” she says. “I have plenty of pictures of emaciated horses with plenty of feed on the property.”

Investigators must also be aware that owners facing possible criminal prosecution and the subsequent loss of their animals might use ruses to explain their animals’ condition, says Geoff Tucker, DVM, who worked alongside animal welfare authorities in New York state before focusing his veterinary practice on equine dentistry. Tucker says some owners will admit their animals’ condition is due to their own lack of horse keeping knowledge. Others lie outright about the animals’ circumstances, he says.

No matter the owners’ verbal explanation, when it comes to bringing equine cruelty cases through the court system, prosecutors must look at the evidence, says attorney Jane Merrill, who served as an assistant prosecutor in Greenwood County, S.C., before moving into private practice. And humane officers must be especially skilled evidence gatherers since animals cannot be their own advocates. “That is, the horse can’t come to court and say, for example, ‘My wallet was stolen,’ ” Merrill says.

The evidence gathered at the scene during the investigation must be as detailed and accurate as possible. That’s because over the time it takes the case to go through the courts, the condition of the property and the horses, especially if they have been seized, will change. Meanwhile, the legal counsel representing the accused horse owners will present their own evidence on the owners’ behalf.

“You only get to gather that evidence and take those photographs once, so good evidence-gathering is crucial,” Merrill says.

Once attorneys on both sides of the case have made their arguments, it’s up to a judge and jury to determine the final outcome based on evidence. Judges must also interpret and apply local animal welfare laws as they understand them. However, how judges do this depends on the clarity and scope of the animal cruelty laws within their ¬jurisdictions.

In some states, including California, Maryland, and Ohio, minimum care standards dictate appropriate horse care in detail. Authorities cite those standards when investigating and resolving equine cruelty and neglect cases in those states. As noted earlier, animal welfare laws vary according to jurisdiction. In some states county officials can write and adopt their own animal welfare statutes based on the minimum standards of care. Elsewhere state legislators write and pass those laws. (See how the Animal Legal Defense Fund rates your state laws at www.aldf.org.)

In addition, depending upon the jurisdiction, laws governing the humane treatment of livestock vary from those that address cruelty toward companion animals such as dogs and cats. And in some cases animal cruelty law language is so very vague that the judges might not know how to best interpret it, says Nicole Walukewicz, chair of the board of directors for Palmetto Equine Awareness and Rescue League, in South Carolina.

As a result, Walukewicz would like to see the government establish an unfunded mandate instructing county governments in states nationwide to develop, fund, and enforce their own animal cruelty laws.

“I don’t like government mandates, but we’ve got to start thinking out of the box,” Walukewicz says. “We’ve got to address these cruelty cases in a rational manner.”

In the meantime, Schofield says law enforcement does its best to keep horses safe. “The horses can’t speak for themselves, so we have to protect them,” he says. “It’s up to us to do what’s right.”

Don’t trespass Some equine cruelty investigations are initiated after a passer-by reports viewing possibly neglected animals from a pubic roadside. Other times someone observes and reports an animal’s condition personally after being invited onto the owner’s property. Both situations allow observers to notify authorities of suspected cruelty or neglect situations without violating owners’ property rights or putting themselves in danger.

“We never want people to do that; it’s just too dangerous,” he says. “Unless we have a warrant, even we have to knock on the door and ask permission to investigate the property.”

In most cases this information can be shared anonymously; however, having tipsters’ names and contact information might be helpful to law enforcement personnel if they decide to move forward with a formal investigation.

Share documentation discreetlyPhotographs of allegedly maltreated animals can facilitate law enforcement investigations into cruelty cases, but only if those photographs are obtained lawfully, such as when animals are in plain view from a roadside or other public venue. Equine investigations instructor Essie Rogers advises against sharing those photographs with anyone other than law enforcement personnel. “It’s probably not a good idea to send the pictures to the local television station or newspaper because the publicity might jeopardize investigators’ case,” she says.

Be patient In most cases law enforcement authorities respond quickly to reports of suspected animal cruelty or neglect. However, these cases take time to investigate and prosecute.