Drink Budweiser or it will kill these horses

Drink Budweiser or it will kill these horses 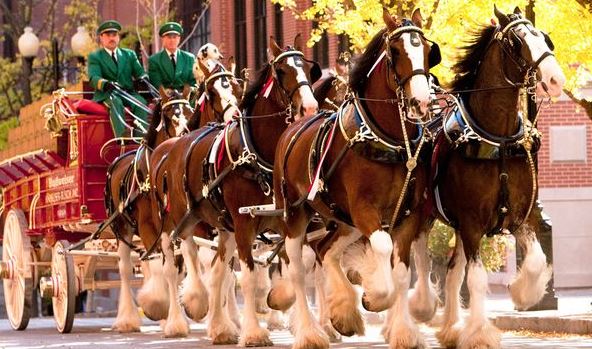 We can only hope that this article is joking. The Budweiser Clydesdales are so well known, surely the Budweiser company could sell them, if they are deemed unprofitable. (Caution – foul language used in article) ~ HfH

From: AV Club
By: Sean O’Neal

America, a proud nation of cerevisaphiles who demand only the finest of ales, lagers, and stouts to piss through their bladders every 15 minutes, has decided that Budweiser is no longer good enough for its public houses, cotillions, or loaded Doritos. According to The Wall Street Journal, the onetime “King Of Beers” is experiencing declining sales, rejected—like all monarchs—by Americans who demand the freedom to choose from a wider democracy of beers, and possibly even some that don’t taste like fermented gutter runoff. Indeed, it’s been determined that some 44 percent of drinkers aged 21- to 27-year-olds have never even tried Budweiser, so vast are their choices, so selfish are their dads. So naturally, Budweiser is threatening to kill some horses.

Faced with this younger, millennial crowd who prefers to Instagram photos of craft beers, and has never experienced the sort of soul-draining factory job that numbs you to the point of Budweiser tasting “good enough,” the company is rethinking its marketing campaign, beginning with its classic Clydesdales. A mainstay of Budweiser ads for more than 80 years, the iconic stallions have long been used to symbolize the “integrity, perfection, and team spirit” represented by the brand, as well as the fact that Bud kinda resembles horse urine.

But as the Journal reports, the horses are already being put down in favor of those “#HolidayBuds” commercials, where twentysomethings look into their trendy webcams and call out the pals they’d most like to settle for cheap beer with this holiday. Meanwhile, Budweiser is concentrating on sponsoring things like food festivals—because “50 percent of 21- to 27-year-olds identify themselves as ‘foodies,’”…