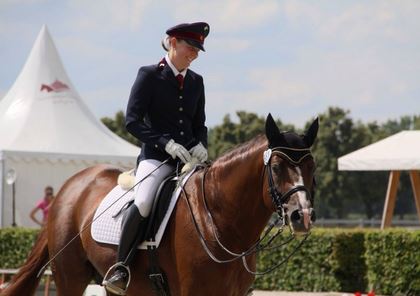 Male / Female – Mars / Venus … we have culturally been made to think that there are inherent differences in the way men and women do just about everything. Horses just do not see us that way. The respond to us exactly as we are. It is one of the beautiful things horses have been gifted with. If a horse is psychologically healthy – they will not prejudge while they are being ridden. They base their judgement on how *you* act. That being said, I have experienced horses that seem to act differently toward women and men when not in the saddle. Could that be *my* prejudice or could a horse’s experience with one gender make them act differently? Food for thought. ~ HfH (Denise) 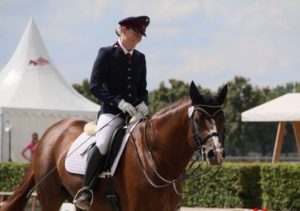 orses seem to be truly gender-neutral. It doesn’t matter to them if their human partner is female or male.
Credit: Juliane Kuhl / Vetmeduni Vienna

For centuries, horse riding was largely restricted to males. The previous situation is in stark contrast to the present day, when nearly 80 percent of riders are women. Modern-day equestrian sports are unique in that men and women compete directly against one another at all levels, from beginners in gymkhanas to national champions in the Olympic Games. “For this reason it is interesting to consider whether a theory of riding that was developed exclusively for men can be applied to women,” explains Natascha Ille, the first author of the recent publication.

A rider is a rider
As Ille notes, “It is often assumed that women are more sensitive towards their horses than men. If this is so, male and female riders should elicit different types of response from their horses.” Ille, Christine Aurich and colleagues from the Vetmeduni Vienna´s Graf Lehndorff Institute tested this notion by examining eight horses and sixteen riders, including eight men and eight women. Each horse had to jump a standard course of obstacles twice, ridden once by a male and once by a female of similar equestrian experience. The scientists monitored the levels of stress in the horses and their riders, checking the amounts of cortisol in the saliva and the heart rates.

The results were unexpected. The level of cortisol in horses’ saliva increased during the test but the increase was not affected by the sex of the rider. The horses’ heart rates also increased as a result of taking the course but the increase was irrespective of the human partner in the saddle. The tests on the riders gave similar conclusions. Again, the level of cortisol in the saliva increased but there was no difference between men and women. The riders’ pulses sped up when the horses switched from a walk to a canter and accelerated further during the jumping course. But the heart rate curves for male and female riders were close to identical.

The distribution of saddle pressure is the same for male and female riders
In a second experiment, Ille and her colleagues studied the pressure exerted on a horse’s back via the saddle. As she explains, “Depending on the rider’s posture and position, the pattern of pressure on the horse’s back may change dramatically.” A special pad placed directly under the saddle was used to analyse saddle pressure in walk, trot and canter. Because female riders are generally lighter than males, the saddle pressure was lower when horses were ridden by females. However, the distribution of pressure did not differ and there was no evidence of differences in the riding posture between males and females.

A fair chance for all
So what does all this mean for modern equestrian sports? Aurich is keen to reassure potential competitors that horses are truly gender-neutral. As she puts it, “Assuming that there is no difference in riding ability, from the horse’s point of view, it does not seem to matter whether the human partner is male or female. Our results make it extremely unlikely that horses have a preference for riders of one sex over the other. And when male and female riders compete against one another in equestrian sports, all of them have similar chances of doing well.”

Story Source:
The above story is based on materials provided by Veterinärmedizinische Universität Wien. Note: Materials may be edited for content and length.