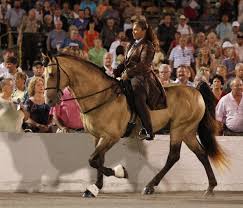 A black female has sued the Tennessee Walking Horse National Celebration, Inc. (SHOW) on grounds that she was charged $5,000 to enter the current national show at Shelbyville, Tn., while others did not have to pay a fee.

Ms. Jackson-Pritchard, a horsewoman who has been a critic of SHOW leadership, is claiming racial discrimination in the complaint, which was assigned to Judge Sandy Mattice.

“Defendants did with full knowledge charge plaintiff, a Black Female, an exorbitant amount of Fees to participate in an invitational public horse show hosted by the named defendants, then subsequently solicited several White Men to show in the same class for no-charge preventing plaintiff to Fair Competition.

“Plaintiff being a Black Female met all physical and financial requirements to exhibit a horse she co-owned and trained herself in the World Grand Championship Class at Annual Tennessee Walking Horse National Celebration Championship Show. The entry office for pre-registration officially closed at 1 p.m. on Friday, September 1, 2012. At the end of closing there were 2 paid horses entered, (both females). On Saturday September 2, 2012 night of the class there were an additional 10 horses that showed up. The Plaintiff paid $5,000.00 to exhibit in the class.”

It says SHOW leadership “contacted via phone & in person, several white male trainers and owners offering them a free from cost entry into the same WGC class in order to prevent the Plaintiff from receiving a placing of 10th place or higher which would payback cash, advance the publicity of her breeding stallion, (Previous Stallion Winners have earned millions of dollars) increase the visibility of the Trainer, and advance their prospective economic business advantage. This would of have elevated the plaintiff, her horse, her being the Trainer and rider in the history books as the first Afro-American Female to win a placing in that class.

“The plaintiff has a long whistle Blower history of public protest of the utilization of Pads and Chains and the Process of Soring the horse’s feet which has been highly contested by the defendants.

CONTINUED at the Chattanoogan.com