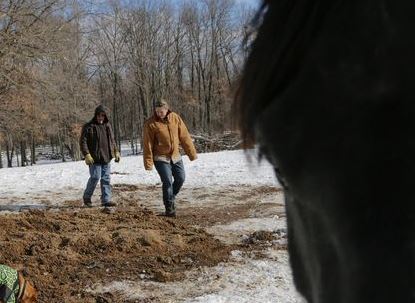 Can a coyote pack take down a healthy horse? Even if they do not outright kill a horse, coyotes could badly wound one. What are your thoughts? The officers from the Michigan Department of Natural Resources say coyotes would be unlikely to kill a grown horse. Many folks with horses keep larger donkeys to help protect their horses from coyotes and wild dogs. Donkeys are wonderful that way – they are very protective and more aggressive than your average horse. ~ HfH 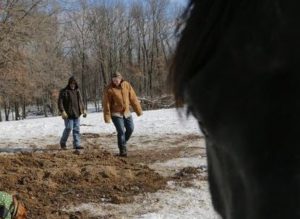 Kallie Meyers says a pack of coyotes came into her yard in broad daylight and killed one of her horses. But the DNR says that’s just not true.

OXFORD – The coyote came out of the woods, walked right up to her back patio and stared at the house.

Kallie Meyers was inside, and she was so spooked she took a photo in case nobody believed her. It didn’t look like any coyote she’d ever seen. Bigger than normal.

Her neighbors didn’t need proof that they’re out there, though.

“I saw two really healthy coyotes going right through my backyard,” said Sally Stevenson, 68, who lives two miles over in Metamora. “My German shepherd is 70 pounds and they were at least that size or bigger. Usually you hear them if they’re packed up and they get an animal — they all go crazy and start yipping. It’s very noisy.”

Jake Losin was in the yard at his sister’s house across the street from Meyers a couple weeks ago when he saw a pack of about eight coyotes. “The very first one I saw, I thought it was a deer,” the 22-year-old said. “I looked at it and it was huge.” He stayed outside and watched several other packs move through.

Over the past few years, Meyers said, all her ducks and geese have been killed. The foxes, opossums, raccoons and rabbits in the woods around her have all disappeared too.

Then nine days ago, on a Saturday in mid-afternoon’s broad daylight, one of her horses was attacked and mauled so bad it had to be put down on the spot.

Meyers says those coyotes did it.

The Michigan Department of Natural Resources says that’s not true.