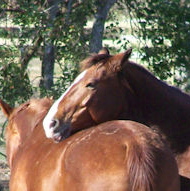 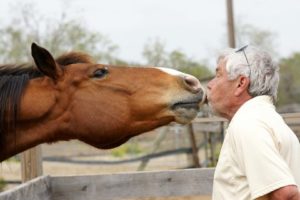 Pete was the first horse that walked through our gates. Eight months old, he had been abandoned in a pasture, gathered up by a new owner and take to an auction, there to be purchased by a killer-buyer. I talked the man out of taking a yearling to slaughter and ended up bringing Pete home to my backyard.

A few weeks later, while I was away on a business trip, a bolt of lightning hit a transformer next to our house. It was too much for the little guy. In a panic, he broke through the wood fence and ran into the woods, there to be captured by barbed wire tangled in the brush. When they found him, his chest had been sliced completely across. The family made a call to our vet, who literally carried him out of the woods and to a waiting trailer, then to the clinic, where he spent the next two months.

Our vet lost a few clients over Pete. They thought it was cruel to keep him alive, but Doc was never one to give up. I was there every day, sometimes all day, doing everything I could to help.

That was fifteen years ago, but it still remains as the single most important turning point in my life. He’s at the ranch now, very much alive, and very much my closest friend.

“I’m sorry I’ve been away so long, Pete. Things just became so busy that I haven’t had a chance to stop. I know it’s been a long time, far too long, but I just wanted to say …”

I stood in the pasture with him, standing on the edge of night, unable to continue. I thought of all the days we’ve had, of all the nights we shared, and wondered how my life would have been different if I had not looked into his eyes so many years ago.

Back in those dark days when he first came to me, back when his wounds were so deep, when his desire to give up so raw, I looked into those eyes and told him that as long as he would try, I’d walk beside him. He gave me his trust, his complete love, and to him I gave mine.

And then we danced.

His first steps were full of fear. The pain from his wounds often left him shaking and sweating. His goal was to stand as still as possible, to lie down, perhaps even to drift away into a place where the pain no longer existed. I couldn’t let him. “He has to move,” Doc told me. “Even a little, even a step or two, or otherwise …” It was that close, that small line away from closing down forever.

And so we danced.

I’d stand beside him, moving one foot at a time, lifting, putting down, lifting another and putting it down, until all four were moved. One step – one very small, weak, reluctant step, and I’d hold him ever so close and cry.

Because he danced with me.

As the days turned to weeks and the weeks turned to months, the wounds slowly closed. While I was gone others told me he would just stand, doing nothing. When I returned and walked into his stall he’d walk with me. We’d turn in circles, go from one side of the stall to the other, back up and do it again. I’d touch the back of his leg and he’d paw the floor. It was our dance, ever so long, ever so slow, but he moved with me, followed what I wanted him to do, step when he needed to, lift his legs high when I pulled them up and place his head on my shoulders when we were through – so tired, so trusting, so wanting to please.

It took a year, almost to the day, before Doc said that he was ready to leave the stall. “Just as you taught him to walk again, you need to teach him to play, to move gently around the yard. Go very slow, a few minutes at a time, a little longer each day, until his muscles can support him again.”

Pete was two years old when he took his first step outside the stall. We went about five feet, then backed up and closed the door. A little more the next day, a little further the next week. Within a month he was spend all day outside, learning how to munch on grass, learning that falling leaves were okay and that frogs and crickets were his friends. We played a dozen intricate games – hide and seek, catch me if you can, you can’t scare me – but more than any other, we danced. I’d stand beside him, holding onto his mane, and walk. I’d touch his hoof with my boot, watch him paw and I’d play like I was pawing, too. His head on my shoulder, I’d swing slowly around in a circle, supposedly teaching him a new sense of balance.

That’s what I’d tell others. “That’s how Doc told me to do it,” but it was far more than balance, far more than exercise, far deeper than rehabilitation.

When you hold someone very close, when the world goes away and nothing exists but two souls blending into one, swirling and circling into an entwined realm of love, it’s a dance to music unheard by others. When the heat or the cold no longer matters, when you refuse to let the arguments and battles and problems come barging in, when all is excluded and the two, if only for a moment, become one, the world becomes a ballroom and the emotions become the orchestra.

As darkness came last night, I stood in the pasture and held him in my arms. He rested his head ever so gently on my shoulder. I told him how very much I loved him, how he changed my world, how I’ve missed him. My tears fell onto his mane as his head pulled me closer to him …

And then we danced.

I came home late last night, too full of emotions and too tired to do much more than sit at my computer. In the early part of the evening I listened to people talk about cars and gas prices, while others discussed databases and equine record keeping and in the middle of it all, I asked them to remember why we are here. There isn’t a horse or a human that doesn’t need love, yet I see others, like me, become so busy that they walk through their midst without once reaching out.

Slow down. Listen to the music.

Come dance with the horses and me.