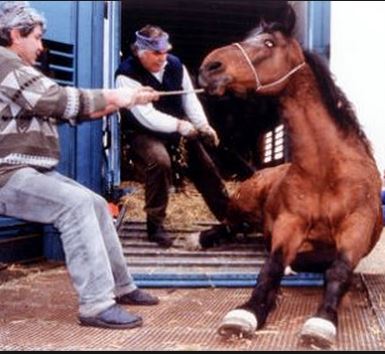 A U.S. District Court judge in New Mexico issued a temporary restraining order to block federal inspections at a Missouri horse slaughter plant, in response to a motion filed by The Humane Society of the United States and Front Range Equine Rescue, along with other horse protection organizations and several individuals. Earlier, the U.S. Department of Agriculture announced imminent plans to provide inspections at the Missouri plant Rains Natural Meats, which would allow the facility to begin slaughtering horses for human consumption.

“This is a temporary but important reprieve for horses,” said Jonathan Lovvorn, senior vice president of animal protection litigation for The HSUS. “The horse slaughter industry is a predatory enterprise that buys up young and healthy horses and kills them to sell the meat to Europe and Japan. We will continue to make the case that the U.S. should reject this industry, just as we would reject a slaughter industry for dogs or cats gathered up under false pretenses and killed as a food export commodity.”

This order comes on the heels of a decision by the U.S. District Court for the District of New Mexico granting a motion filed in July by The HSUS and Front Range to temporarily block similar inspections that USDA had authorized at horse slaughter facilities in New Mexico and Iowa. That temporary injunction remains in place pending the court’s consideration of a lawsuit filed by The HSUS and Front Range alleging that USDA violated the National Environmental Policy Act by authorizing inspections without conducting the necessary environmental review.