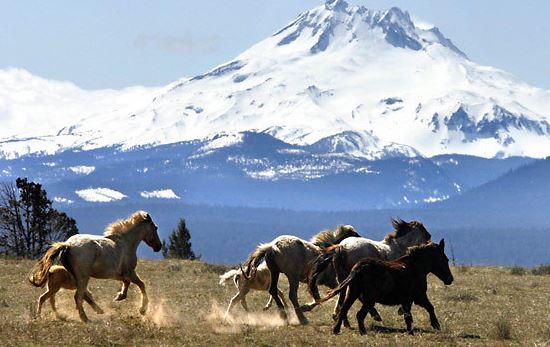 The Bureau of Land Management needs to be held accountable for the deaths not only by capture but in their corrals (see full article). Humane or inhumane… what is the necessity of these round ups? ~ HfH

From: The Daily Astorian 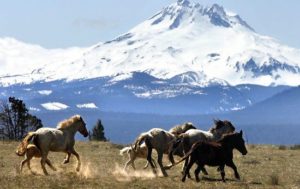 Wild horses at home on the Oregon range.

In the mountains outside John Day, a wild horse made a tasty find. Hay was strewn about on the forest floor. As she went to eat, the mare took one step too far, tripping a line that slammed a gate closed behind her. She had trapped herself.

On August 4, 2012, a government contractor backed his rig up to the passive trap, preparing to haul the wild horse to the Bureau of Land Management corral in Burns.

The mare wanted nothing to do with it. As the contractor tried to load her into the trailer, the mare fled in fright, slammed into the metal bars of the trap and broke her neck.

Faced with a horse crippled and in pain, the horse trapper had just one option. He euthanized her.
Fatal injuries like this are more often associated in the public eye with helicopter roundups, which have led to substantial protests over the last few years. However, data shows passive traps have been even more lethal in Oregon.

And once they’ve made it to the corrals, records show that wild horses aren’t out of danger.

Records obtained from the BLM show that passive traps in Oregon have been more deadly than helicopter roundups were in the state. Since 2010, under 1 percent of the horses have died in both types of operations.

Important!
Stop Donkey Basketball from coming to the Houston area this February.
Contact the Senior center who will be acting as cheerleaders!
CLICK HERE

[spacer size=”10″]Two weeks after the mare broke her neck, contractor Larry Osborne was out to collect three more horses who had ensnared themselves in a bait trap. Everything appeared to be going smoothly until the moment he and his partner tried to get the horses into the trailer.

Just as they neared the rig, the horses resisted, turned and ran. One bolted head first into a panel. This time, it suffered no serious injury.

Osborne says, “Well I can say one thing honestly, the way we catch them is the most humane way.”
He works frequently for the government capturing horses and he’s not a critic of the agencies that pay him.

Still, he concedes he’s not a particular fan of BLM’s more common method of using helicopters to roundup wild horses.

“Well, that’s probably the worst, as far as I’m concerned,” says Osborne. “The little colts, sometimes they run them too far. *

Long time critics of BLM roundups have praised bait traps for being the most humane way to capture mustangs.

“Of all the range of options available to the BLM, the bait traps are the best method,” says Scott Beckstead, Oregon director of the Humane Society of the United States. “The baiting process is so much quieter and doesn’t involve the terror, the panic that goes along with being chased by a helicopter.”