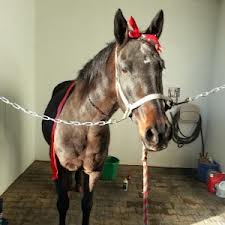 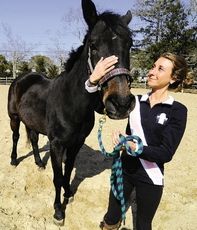 Brittany Wallace, 17, attends to her horse Scribbles at her home in Harwich. Brittany had lost track of Scribbles, her childhood companion, but found a photo of her on a website hours before the horse was to be shipped off to be killed and sold for human consumption.
Cape Cod Times/Merrily Cassidy

A Harwich teenager and the horse she grew up with have become a leading face of the latest national effort to ban slaughtering horses and exporting them for meat.

In a one-in-a-million happenstance, Brittany Wallace found her childhood companion, Scribbles, hours before the mare was to be shipped to Mexico or Canada to be killed and eaten.

Last month, Brittany testified in the U.S. Senate, telling the story of how her 17-year-old pet — born five days before she was — became lost and, in the nick of time, saved.

In an interview last week, Brittany said of transporting horses for slaughter, “It’s honestly America’s dirty little secret. … It’s happening every day, and unless we step up and do something, it’s not going to stop.”

The story of Brittany and Scribbles’ reunion begins at 6 a.m. Nov. 13, and reads like a novel.

The Wallace family was awake early, comforting their much-loved dog, Kona, who was dying of kidney failure. Brittany went online to research a paper she was writing on horse slaughter. She saw a brown mare with a grisly leg wound on the Facebook page of Omega Horse Rescue and Rehabilitation in Pennsylvania, a nonprofit organization.

“I saw a picture of her head and I saw her eyes,” Brittany said. “I told my mom, ‘I think I found Scribbles.'”

Brown mares are as common as mud. Omega’s founder, Kelly Smith, thought the Wallaces were another family carried away by wishful thinking. But she agreed to look for the scar they said would be on the horse’s backside.

“I thought there’s absolutely no way this is remotely possible. When you have a brown horse, there are just so many of them, maybe 200 to 300 a week. What are the chances? But I picked up the tail the next day and saw a half of a horseshoe scar, just as they had described. There were tears on both ends of the phone,” Smith said.

Brittany’s parents, Scott and Kay Wallace, said the family bought Scribbles for their daughter when she was 8½. “When she was a little girl, she would lay down in the paddock with Scribbles and a book. She and Brittany grew up together,” Scott Wallace said.

With all the passion of a little girl with her own horse, Brittany taught Scribbles to bow, extending one leg and lowering her front half.

“I’ve reunited racehorses with their owners because racehorses have a tattoo on their lip. But I’ve never reunited a horse that had no visible (obvious) markings,” Smith said in a telephone interview from Pennsylvania. 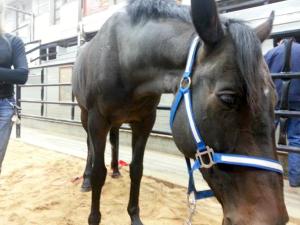 Scribbles at the horse sale where she was purchased by Kelly Smith.

As the story circulated, via social media and a Pennsylvania newspaper, there were skeptics. One man called Smith a liar and accused her of working for PETA (People for the Ethical Treatment of Animals).

But Smith was there the December night the Wallaces came to collect Scribbles.

“The horse knew them instantly. She knew her family. When Brittany went in the stall, (Scribbles) just started bowing and bowing and bowing. She went on and on. In all my years of dealing with horses, I have never witnessed what I saw that night. It was incredible,” Smith said.

“I do believe things happen for a greater good. A horse who nearly lost her life brought a whole new awareness that sometimes people’s horses are wanted; not all (horses in the kill pens) are old and ready to go to slaughter. Look at all the good that has come from this one situation.”

The Humane Society of the United States used part of Brittany’s March 12 testimony in a YouTube video, which urges passage of the Safeguard American Food Exports (SAFE) Act to prohibit horse slaughter in the U.S. and end the export of more than 150,000 American horses a year that are slaughtered as food for human consumption. The bill was introduced this year in the Senate by Sen. Mary Landrieu, D-La., along with Sen. Lindsey Graham, R-S.C. A similar bill was introduced in the House by Reps. Patrick Meehan, R-Pa., and Jan Schakowsky, D-Ill.

“We have made ending the slaughter of America’s horses for human consumption one of our top priorities,” Keith Dane, the society’s director of equine protection, said in a written statement. “Americans don’t eat horses, and 80 percent of voters strongly oppose slaughtering horses for their meat. That’s because American horses are our trusted companions and partners in recreation, work and sport — not dinner.”

The Wallaces said they sold Scribbles to another Cape farm after Brittany, now 17, got older and started riding more competitively. But the family retained the right of first refusal, meaning they could buy Scribbles back if they didn’t approve of anyone else trying to buy her. They visited for a couple of years, but found the horse gone one day. Kay Wallace said no one could explain where she was.

The Wallace family had actually adopted another horse from the feedlot at New Holland, Pa., never dreaming they would one day find their brown mare there.