Burning Up: Photosensitization and Sunburn in Horses

Habitat For Horses / breaking  / Burning Up: Photosensitization and Sunburn in Horses
0

Burning Up: Photosensitization and Sunburn in Horses 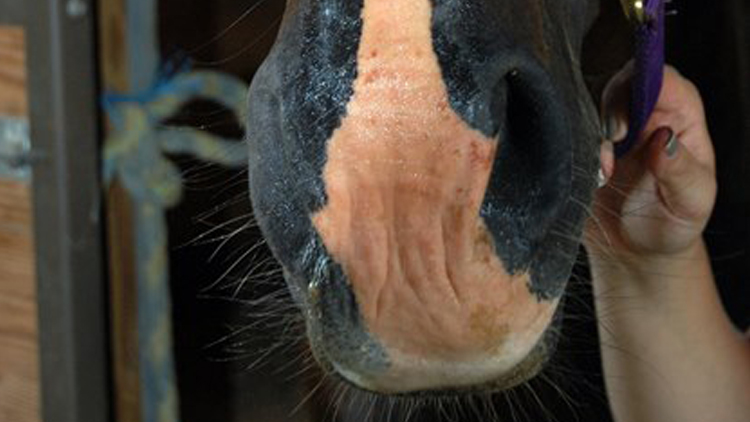 “Horses with flashy, white markings are more vulnerable to sunburn and photosensitivity because of their unpigmented skin.”

Chrome. It enchants horse owners and judges alike, turning heads in the barn and in the competition arena. Many horsemen covet and some even breed for eye-catching white legs and facial markings, and fans ooh and ahh about it from the stands. The flip side to flashy, however, is that the underlying unpigmented skin is vulnerable to the sun’s ultraviolet (UV) rays—and burn it does, becoming red, sensitive, and peeling. But these horses’ reactions can become even more serious than sunburn, involving localized swelling, crusty scabs, oozing blisters, and areas of severe inflammation. These are all signs of photosensitivity, which can be brought on by a variety of exposures.

Some plants (St. John’s Wort, buckwheat, perennial ryegrass, whiteheads) can cause skin problems when horses ingest or even touch them. Photosensitivity is a severe dermatitis (skin inflammation) that occurs when certain plant pigments damage nonpigmented skin cells with sun exposure. The pigments get absorbed in the gut before passing to the skin via the circulatory system.

Stephen White, DVM, Dipl. ACVD, professor and chief of service in dermatology at the University of California’s School of Veterinary Medicine, in Davis, explains that “photosensitivity in the horse is usually caused by a photodynamic (inducing or intensifying a toxic reaction to light) agent … in or on the skin that absorbs energy from light and transfers it to skin cells, which ultimately destroys them.” This is known as photosensitivity Type I, sometimes called primary -photosensitivity.

“The activating light is generally in the ultraviolet A range (320-400 nanometers),” he continues. “Melanin (pigment) in the skin screens ultraviolet light, thereby limiting photosensitivity reactions to white and light-colored areas of the horse’s body.”