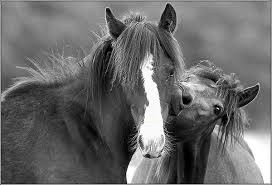 The Bureau of Land Management (BLM) is studying the spaying of fertile wild mares in order to control the growth of the wild horse population. But the agency’s senior wild horse and burro program adviser said that use of the procedure is not imminent.

According to BLM estimates, there are approximately 37,300 wild horses and burros roaming BLM-managed rangelands in 10 western states. The agency estimates that another 50,000 animals currently reside in holding facilities. The 1971 Wild Free-Roaming Horses and Burros Act protects wild horses and burros and places them under BLM jurisdiction.

BLM spokesman Tom Gorey said that the wild horse population can double every four years. To control wild horse herd sizes, the agency removes animals from their ranges to short-term corrals and long-term pastures. Some wild horse advocates oppose these gathers as a population control method. Also to control herd population, the agency has treated some mares with the fertility-control drug porcine zona pellucida (PZP) and released more stallions than mares back onto the ranges after gathers.

Dean Bolstad, senior advisor for the BLM Wild Horse and Burro Program, said that in 2012, the agency’s Wild Horse and Burro Advisory Board suggested removing the ovaries of some wild mares as a way to control herd growth. The procedure, known as an ovariectomy, is sometimes used to eliminate mares’ fertility cycles, treat disease, or control estrus-related behavior. The BLM is deliberating exercising ovariectomies as part of its overall herd population growth plan, Bolstad said.

“We are considering the Advisory Board’s recommendation and consulting with fertility experts and with veterinarians,” Bolsted said. “But we have not started spaying mares.”

Bolsted said that the BLM’s decision to use the spay procedure and how it will be applied will be contingent on the opinions of veterinarians and other specialists, and on the experiences of those who have used the procedure in both wild and domestic mares.

Wildlife fertility specialist Jay F. Kirkpatrick PhD, director of the Science and Conservation Center in Montana, said that issue of the wild horse fertility is complex. Kirkpatrick said that the form of PZP used by the BLM has not “delivered on its expectations.”

Meanwhile, Kirkpatrick said that ovariectony is generally safe and effective.

“If done carefully and professionally, modern ovariectomy is fairly safe and reasonably stress free (beyond capture),” Kirkpatrick said. “The real issue is which mares will suffer the loss.”

Kirkpatrick said if the BLM applies the spaying option, it is critical that the agency know which mares have undergone the procedure and which have not. He explained that if a mare has made a genetic contribution to the herd, rendering her unable to produce any more foals via an ovariectomy “isn’t bad. But if she has not made that genetic contribution to the herd, then it is bad.”

Beyond that, the use of ovariectomy could also influence the social structure of wild horse bands, Kirkpatrick said: “Ovariectomy will, of course, eliminate estrus behavior and that may or may not have an impact on social structure, depending upon whether or not (the BLM) allows some mares to remain intact in each band.”

CONTINUED – Read more and retweet from THE HORSE