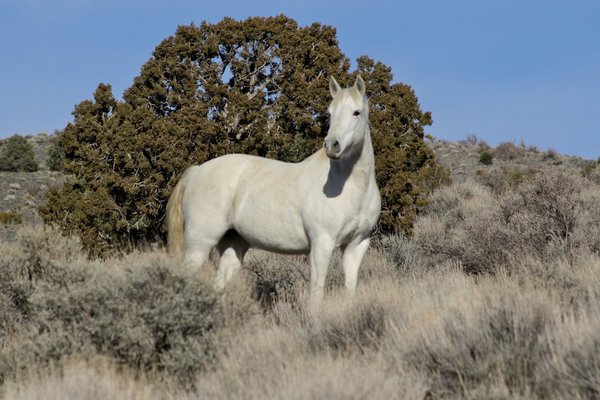 The sparking point for the tensions with the Utah Cattlemen is actually over whether they wish to follow American laws or not after the round up of Cliven Bundy’s cattle off Federal land in Nevada. Law enforcement say they are too afraid of the violence if a range war were to begin. Mr. Bundy has been allowed to disregard federal law for over a decade because he does not recognize “federal authority” – neither it seems do the local law enforcement or the Utah cattlemen by giving an ultimatum to the BLM. Either the wild horses go or they will round them up and dispose with them as they please. The BLM has chosen to give in to these thugs who seem to be nothing more than a wing of the Posse Comitatus. ~ HfH 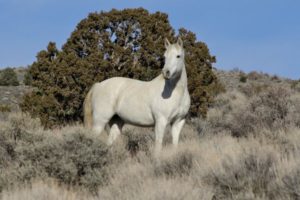 Tensions bubbled over on the range in a turf battle that has been simmering for decades over one of the icons of the American West and scant forage on arid, high desert lands from Nevada to Wyoming.

With the presence of wild horses continuing to pit animal advocates against ranchers, the U.S. Bureau of Land Management, which is caught in the middle, on Saturday began seizing hundreds of cattle from a longtime rancher that it says are trespassing on public land in southern Nevada.

The action came a day after the agency agreed to remove horses from the range in southwest Utah after Iron County commissioners threatened to take matters in their own hands.

Wild-horse protection advocates say the government is rounding up too many mustangs while allowing livestock to feed at taxpayer expense on the same rangeland scientists say is being overgrazed.

Ranchers say the government refuses to gather enough horses in the herds that double in size every five years while moving to confiscate cattle on lands where their ancestors have operated for more than a century.

The BLM says it’s doing all it can, given budget constraints, overflowing holding pens and a distaste for the politically unpopular options of either ending the costly roundups or slaughtering excess horses.

The agency started taking cattle Saturday from Cliven Bundy, who it says has been trespassing on U.S. land without required grazing permits for over 25 years. Bundy doesn’t recognize federal authority on land he insists belongs to Nevada.

“These people are thieves,” Bundy told the Associated Press on Saturday. “I haven’t even started fighting yet. You think I’m going to lay down and just give up. I’m going to fight for the Constitution and state sovereignty.”

Asked what actions he planned to take, Bundy replied, “Why don’t you wait and see. As I told the BLM and county sheriff, ‘I’ll do whatever it takes.’”

Plans call for the removal of some 900 trespassing cattle from 1,200 square miles of land in southern Nevada managed by her agency and the National Park Service over the next three to four weeks, she said.

A federal judge in Las Vegas first ordered Bundy to remove his trespassing cattle in 1998. Similar orders were issued last July and again in October.