Banning Double-Deck Trailers For All Horses

Banning Double-Deck Trailers For All Horses 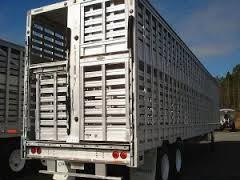 WASHINGTON, D.C. – U.S. Senators Robert Menendez (D-N.J.) and Mark Kirk (R-Ill.) have reintroduced the Horse Transportation Safety Act of 2013, which would prohibit the interstate transportation of horses in double-decker trailers and would create civil penalties for each horse transported.

“Double-decker trailers are designed for cattle and hogs, not horses,” said Senator Menendez. “This legislation would put a much needed end to the inhumane and unsafe practice of transporting horses in trailers with two or more levels stacked on top of each other, regardless of the purpose.

Not only is this type of conveyance cruel, but it also jeopardizes safe roadway conditions for New Jersyans and all of those who travel through our state.”

“It is time we put an end to the inhumane and unsafe practice of transporting horses in double-decker trailers,” Senator Kirk said. “A 2007 accident in Illinois involving one of these trailers killed 18 horses. It is not only a cruel way to transport horses, but it also puts motorists’ lives at risk.”

Six states have banned the use of double-decker trailers for any type of horse transport: Maryland, Massachusetts, New York, Pennsylvania, Rhode Island, and Vermont. Other states, including Arizona, California, Minnesota, and Virginia have various state laws regulating their use. A uniform federal law is needed to eliminate confusion from a myriad of state laws on horse transport.

In November 7, 2007, the USDA prohibited the transport of horses to slaughter in double deck trailers. The Horse Transportation Safety Act of 2013 codifies this across the board.