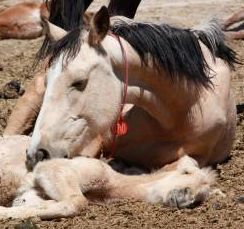 From: The Mountain Mouth

It’s July. Outside Reno, Nevada, in the baking desert, a tiny mustang foal tries to lie down to get the sleep her growing bones needs. But there is no shade; the sun burns as relentlessly as the circling flies. She folds her stick-like legs, and thuds to the hard manure-spotted earth. The air temperature is 105, but the desert ground is over 160. Minutes later, the foal struggles back up without sleeping. Her mother is thirsty. There are over seventy wild horses sharing one trough of water. The mare can’t fight her way to the water as often as she needs. Her milk is compromised.

The foal fights for life, but in a few days, dies. 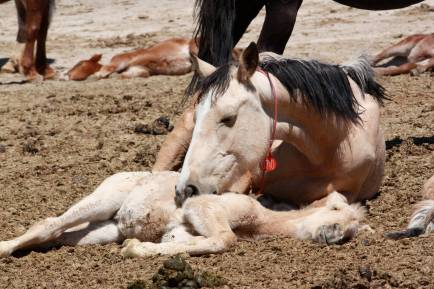 “The extreme 105-degree temperature overwhelmed me within minutes,” said Marjorie Lynne Wagner, advocate, of her visit on July 1 to the Palomino Valley Holding Facility. “When I tested the ground temperature with a new Ryobi infrared thermometer, I was shocked to see how high it read… up to 164 degrees.”

Thousands of public pleas to provide shade and more water for the horses at Palomino Valley and other facilities went unanswered this summer. Jetara Séhart, executive director of Native Wild Horse Protection, offered the Bureau of Land Management funds and materials to erect shelters for the captured mustangs, but as July’s sweltering days dragged on, there was no response. Instead of shade, the BLM installed sprinklers, which the horses studiously avoided as seen in this press release.

Unhappy with the government’s response, advocates planned a “Gimme Shelter” protest for July 20 to draw attention to the suffering horses. When they arrived at Palomino, they were met with threats and told their cars would be towed.

“You need to play nice,” BLM special agents reportedly said. It was insinuated that more protests and public scrutiny could lead to the entire facility being shuttered to the public, like what happened at Broken Arrow. 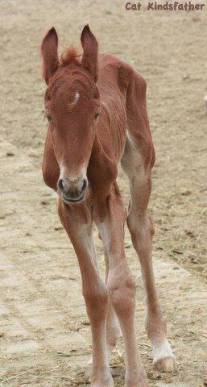 “Little Feather” a.k.a. “Sorro” was euthanized

The protest was moved to Carson City.

Until 2010, the public was welcome at Broken Arrow, another Nevada mustang and burro holding facility. Most of the almost $80 million annual budget of BLM is spent on the “long term holding” of over 50,000 once-wild mustangs and burros.

Author Terri Farley toured the facility that year and was shocked to see a “tiny emaciated foal standing at the fence line, seeming to plead for help… I was shocked at his condition.”

“I never did witness any shelter to protect near two thousand horses, foals and burros,” said advocate Cat Kindsfather, who photographed that foal the day before its death.

The dead foals are removed from the pens, and their bodies discarded in secret locations. Their deaths are secret, because dead babies are not counted among casualties of the Wild Horse and Burro program.

Why? The official answer is that the foals are too young to have been branded. (A freeze brand is applied to all horses and burros once captured from the wild. The brands serve as identification for each horse.) The obvious beneficial side effect of this policy is that the official death count of the round-ups is kept artificially low. Farley has dubbed them “Phantom Foals”.

“If you are managing the horses properly you need to account for all deaths as these are necessary indicators as to the standard of care,” points out Neda DeMayo, director of Return to Freedom, a 300-acre California sanctuary that houses 400 mustangs, some in intact family bands. De Mayo and others, despite their sanctuaries’ already strained resources, recently outbid killers for mustangs that mysteriously ended up at an auction mixed with Indian mounts, at the Fallon, NV auction last month. For decades, the non-profits and citizens have been left with the clean-up job for a problem artificially created by the wild Horse and Burro Program.

“No animals have passed since July 2,” Palomino Valley Director Jeb Beck said to advocates at a recent press event. But many no longer accept the agency’s numbers.

“We’re concerned about the foal deaths,” Séhart said. “There were 2,000 wild horses at Palomino Valley. The numbers there keep changing mysteriously… now there are 1700. But no horses are dying?”

“If this is what we can see, then what’s going on behind closed doors?” 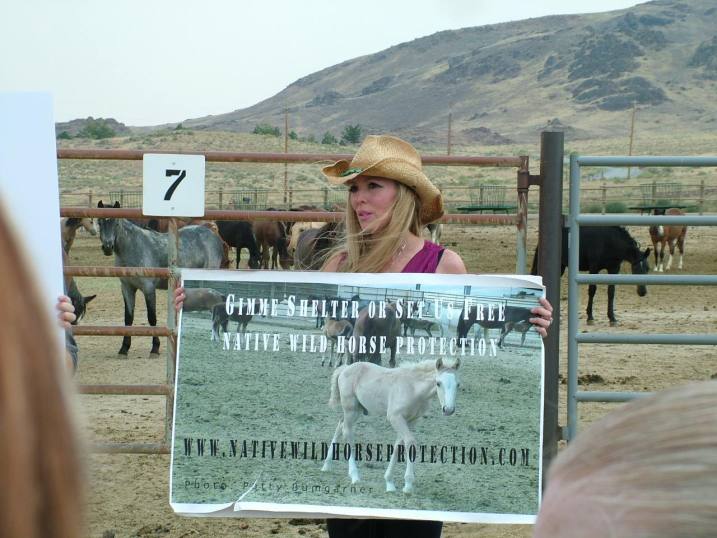 Jetara Sethart: Protesting at At Palomino Valley.
“They kept asking me which one I had picked out to save. I choose all of them.”