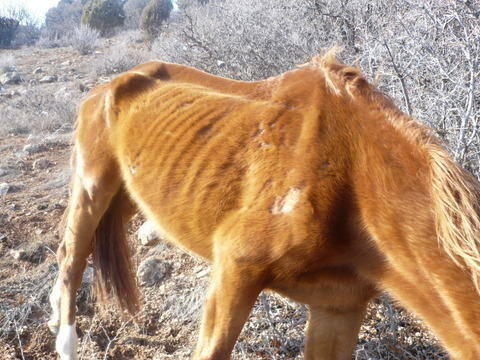 (Note: While there is probably a lot more to this story than is being published, it is hard to accept that no criminal charges will be filed against those who starved horses to death. Please go to the article site and comment by clicking here.) 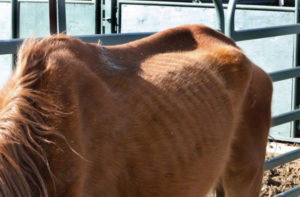 SPANISH FORK — Animal abuse charges have been dropped against a Weber County man in the ongoing dispute between ranchers regarding a herd of horses found starving in Utah County.

Justin Barrow, who helps run Barrow Land and Livestock in Weber County, pleaded not guilty last month to 15 counts of animal cruelty. He wasn’t surprised Wednesday when 14 of those charges were dropped.

“Like we knew what was going to happen, all the charges were dropped and we were exonerated,” Barrow said.

The single charge that wasn’t dropped was in regards a rescue horse that was dropped off at his ranch, not one of the animals from Utah County. Barrow said he is working to correct that situation and deal with the charge.

Rory Childs and his mother, Trudy, who run Smokey Mountain Ranch in Utah County, each are being investigated for 101 instances of animal cruelty. Utah County Sheriff’s deputies who went out to check on the animals said most were starving, and some were dead.

The family said they haven’t been able to feed the animals because of financial struggles.

Barrow contracted with the Childs family to keep and feed their horses until September, when the owners took the horses back, saying they weren’t being cared for.

“We knew that we took good care of these animals and we spent a lot of money, even when we weren’t getting paid,” he said.

“She hurt our family both financially and our family name, and we’re not going to take it lying down,” Barrow said. “We’re country boys, and we have honor and respect.”

Rory Childs said Friday that the case is complicated and he wants people to wait to hear all the facts, which will come out in court.

He also thanked those people who have been donating hay for the horses.