An update on Dude

Habitat For Horses / breaking  / An update on Dude
3

An update on Dude 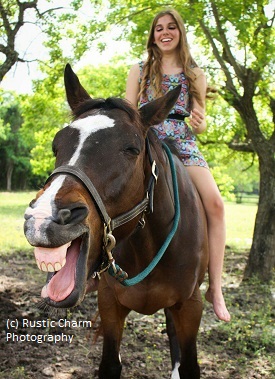 During the summer of 2013, a 16-year-old girl and her mother came to our ranch to discuss the possibility of adopting a horse. Lauren knew a little bit about horses, but this was her first venture into taking full responsibility for everything a horse needs.

They discussed the horses around them with the ranch manager, talking about the possibilities of finding a horse that could do hunter/jumper events, one that didn’t need too much training. The qualification narrowed the choices down, even more when color and size were mentioned.

That’s when a horse named “Dude” walked up behind them. Dude came to us in 2012, a thoroughbred ex-racehorse, with a ton of bad habits and a “better than you” attitude. After hanging around the ranch for a year, Dude took one look at Lauren and must have decided that Lauren was going to be his partner. As often happens, the horse picks the person. It didn’t take that much – a soft nicker, walking quietly beside her – and the words were finally said, “Mom, this is the one.”

Dude exceeded all expectations during the next year. A few awards ended up on the mantle, but something far greater was happening between a girl and her horse. It wasn’t just love, it was a relationship built on trust and respect, on a deep understanding of the other’s needs. Dude and Lauren grew closer together than ever before.

But grown up things happen. It was suddenly time for college and, although the separation was hard on both of them, the knowledge Lauren gained from working with Dude led her to make a decision about her goal in life – to be an equine veterinarian.

The summers were wonderful – full of rides down secret paths, running across open fields, long hours of grooming and more hours of just being together. It was hard to go back to school, but Lauren knew that to be of help to horses, she needed to study hard and make high grades. Veterinarian school is famously tough, and the real challenge of being accepted was still ahead.

It was a cold, rainy afternoon when Lauren got the call on her cell phone. Something was wrong with Dude. He was thrashing around in his stall and the doctor was on his way. “We’ll call when we know something,” her mother said. But for Lauren, there was no waiting. She called the college office, asked them to notify her teachers that she had an emergency, grabbed some clothes and drove home, tears streaming as she worried and waited to hear.

She met her mom and dad at the veterinarian clinic and saw Dude in a stall laying down with IV fluids hung above him. “It’s colic,” her mother said. Lauren knew what that meant, that something was blocking the digestive tract and causing intense pain.

The doctor called them into his office. “We’ve tried the usual medications,” he said. “Nothing is working. We have him sedated now but we’ve reached a point where you have to make a decision. Either we operate on him to see if we can remove the blockage, or we put him to sleep. There are no other choices.”

It wasn’t really a choice. They all knew that operating – even if the results were not good – was the only decision. “Since you want to be a vet,” the doctor said, “you need to scrub up and come help. It’s time for you to learn how it’s done.”

The recovery took months of stall rest, something Dude disliked. Very slowly, the incision healed and one weekend, when Lauren came home from school, she put a halter on Dude and stepped out into the paddock. Dude was well again. Her best friend, as stubborn and obnoxious as ever, walked beside her through the tall grasses and wildflowers of a perfect spring day.

An adopted horse and a young lady stood together under a tree. Five years had flown by; a girl turned into a woman and a horse survived the threat of death. She jumped on his back and laughed with joy. Dude laughed, too. He had made the right pick. This was his human and they were finally together again.