All Horses Are Created Equal

Habitat For Horses / breaking  / All Horses Are Created Equal
6

All Horses Are Created Equal 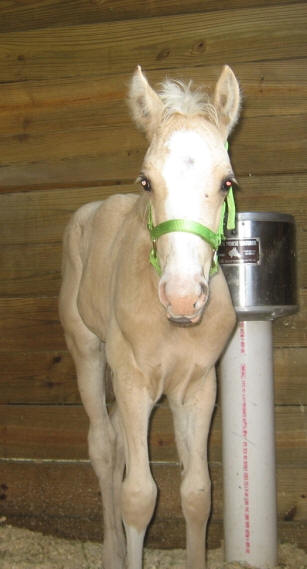 This was originally written and posted by Jerry back in January 2012…but the point is as valid today as then. And Sandy is still with us. He has sanctuary status – he will live his life being treated with love and kindness – what every horse deserves. ~ HfH

The little palomino colt stood close to his mother, trying to hide from the big people that gathered around the corral. One of them tried to reach out for him, but he quickly moved away, out of reach. His mother pinned her ears at him, warning him to stay away from her.

“Did you have the vet look at him?” one of the people asked. 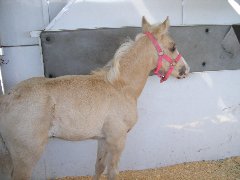 “I can’t be wasting money on crippled horses. I was just gonna to put him down. You all want him, take him. Hell, even his momma don’t want him. He ain’t worth nothin’.”

The horse trailer backed up to the corral. Three people grabbed the colt, gently lifting him into the trailer. Scared, shaking, he cried out for his mother. She didn’t answer. For the first time in his very short life, he was truly alone.

Sandstorm, a beautiful palomino thoroughbred, was born with scolosis, a developmental condition resulting in the spine growing into an “S” shape. Some folks had the theory that another horse kicked him, others believe he was born with the condition. Perhaps it was both, but how it happened really wasn’t important to those that came to retrieve him. They came when they heard that his mother was rejecting him and the owners, a couple of backyard breeders, were going to put him down.

At two months of age, Sandstorm was undernourished, had a hernia on his belly, bad feet and a protruding bump on his spine. If that wasn’t enough, what little milk he was able to obtain from his mother had barely kept him alive. Her rejection of him was a cruel reflection of what happens in the animal world, but that rejection also showed in his personality.

Shortly after the trailer ride, a foster family picked him up and took him to their home. Days of hand feeding, visits to the vets and a slow introduction to the gentle touch of hands gave the colt a new outlook on life. Sandstorm stayed with Chris and Dale Dunn for over a year, gaining confidence in himself and growing into a beautiful young man.

In July of 2009, Chris sent Sandy to stay with Rebecca at her foster home close to the ranch. Sandy joined a dozen other horses, most of them either elderly or with physical issues that make them “unusable” in the way most folks want to use horses. As with so many other true foster homes, there is nothing less important that needing a horse to ride. If that is an option, then it’s a minor attribute. The real pleasure comes from far deeper, it comes from developing and maintaining a solid relationship with the horse. 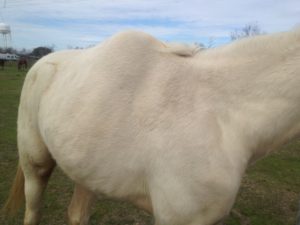 Sandstorm is special, and he knows it. The memory of those first two months were quickly erased at the hands of Chris and Dale. Knowing them as I do, never a harsh words was spoken in his presence. His behavior at Rebecca’s is controlled by her pointing a finger at him and saying, “That is inappropriate behavior.”

Sandy never really needed discipline or training. He knows when he’s crossed the line, when his play gets too rough for the other horses. The pinned ears of the others probably remind him of the lessons learned from his mother, and that fear of rejection is very real to him. Like all horses, he wants love, he wants to be part of the herd, to be accepted.

Although the calls seldom happen, one of the greatest fears with a herd of elderly and often crippled horses is that call for help when a horse is down and can’t get back up. Usually it’s a result of a slip, or perhaps they laid down and stayed down too long, loosing feeling in the back legs. In the past, that call often resulted in a half dozen of us using sheets, ropes and hand clapping to get them to rise again. No more. Sandstorm is now our tool of choice.

A few nips, a couple of pinned ears from the downed horse, a few more nips from Sandy and you can almost hear the anger rising from the ground -”I’m going to get up and kick the tarnation out of you!” Three times it’s worked, so its now become Sandy’s job. If a horse is down, call Sandy.

This April, Sandstorm will be four. We know what’s ahead. Doc minced no words in explaining the pressure on the lungs and the distorted intestinal tract. The first sign will be difficulty breathing, slowing down, signs of discomfort. At that point, we’ll know that the time has come for him to move on.

There is a logical question being asked, for which there is an illogical (to some) answer – why? Why take up pasture space, why spend the money on hay and feed, why give the limited time and effort of volunteers to a horse that is “deformed, crippled and useless?”

I wonder who set those guidelines, who wrote the rulebook on what is to be considered “deformed, crippled and useless”? I have no doubt that those words are uttered by young, healthy humans who have no concept of the soldier who comes back from war without any feet, the weakening system of someone with MS, the shaking and shuffled walk of someone with Parkinson’s. They cannot grasp the enormous genius of Stephen Hawking or the unparalleled beauty of a child with Down’s Syndrome.

Life is far too precious to cast it aside, to throw it in the ditch or dump it in the woods. If there is even the remotest belief in a higher power, what does the throw away concept say about the true depth of one’s religion?

One outstanding feature I’ve always found among true horse people – there is a deep respect for life and a strong sense of responsibility for not only those living creature under their direct care, but for all living things. Sandstorm is no exception.

Personally, I don’t believe in Karma, predestination or Divine Intent. What I do believe in is the blessing we receive by being given the opportunity to look at Sandstorm and witness the intense beauty of an amazing life. He is a gift for us to treasure, a lesson for us to learn, and a message for us to carry to others.

The differences between humans is never more blatant than when watching others when they first see Sandy. Some, like the breeder that first owned him, see nothing but a failed 11 months from the mare. Others see a waste of time, energy and money. Some are repulsed, some find it “interesting.”

Many walk over and give him a hug and, moments after that initial glance, no longer see the twisted body. That, to me, is the sign of a person that truly loves horses.

This will probably be Sandstorm’s last year with us. Once we see the first signs of pain, we’ll know that the days are limited and we’ll make the decision that the time has come. Until that hour, to us there is no difference between Sandy and the $150,000 super show horse. They all have a value far beyond a dollar sign.

All horses are created equal, only our perception creates the difference.