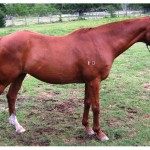 Back in December I wrote the first article about Bella, “Here’s your typical slaughter bound horse.”

In that article I told you about a horse that was tied to a tree with wire that had become tangled around her foot. During her struggles, the foot was almost cut off. Bella came as close to death as possible, yet thanks to our ranch crew and the vet, she passed death and came back. Her tendon was sliced, she lost far more blood than I’ve seen in a long time, but the next day she was up – on IV’s and in a lot of pain, but alive

I wrote, “If she survives, and there is a serious chance she won’t, she will never walk normal again. I guess for a lot of folks, that makes her prime for the slaughter truck. Hell, I bet she’s bring $25 at the auction, and I’m sure someone in France would love to have her for dinner.

But through some small miracle she ended up as Case Number 11-152 on our books and, God willing, someday soon she’ll be standing by the hay stacks with Pete and Tiger and a half dozen “useless” horses, doing what horses do best.” 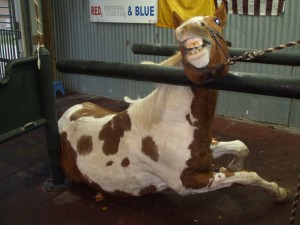 Bella down due to a sliced tendon

Six months have passed and now Bella (now known as Adella) runs out of her stall in the mornings, kicking up a storm. According to the vet, the impossible has happened – the tendon has grown back and she has 85% use of her foot. Adella has been reborn!

For five months she stood in her stall, almost insane with boredom. Today she’s become the ultimate pocket pony – always wanting to be around people.

I don’t consider it a small miracle. It’s very big, so much so that our vet wants to write it up for a paper he’s submitting.

This is the last time I’ll be writing a blog at this URL. Sometime Tuesday the new and improved Habitat for Horses website will go online. It’s taken six months of hard work by Shelli, our Web Designer/Developer, to get almost everything transferred to the new site and I promise, it will be beautiful. Among all the advantages will be our ability to update things without requiring any knowledge of HTML, scripts or coding, all of which have hindered us in the past.

After this, you’ll need to go to Habitat for Horses to catch up on the latest stories.

We’ve always made a commitment to not buy horses at auction. Working with law enforcement, we bring in far more than our fair share and overloading is something I refuse to do. 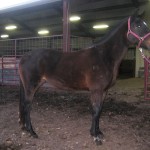 Someone sent me a notice about two horses being auctioned off by Texas A&M, and that sent me over the edge. We caught them once sending horses off to slaughter and I have no doubt that destination was the future for these two. The description of one horse was “limping slightly due to her age.” She’s in her mid-20’s. The other is described as hard to handle because of a brain injury.

The best vet school around and this is the diagnosis? Sad. Very, very sad.

We can’t save them all, but these two will be safe.