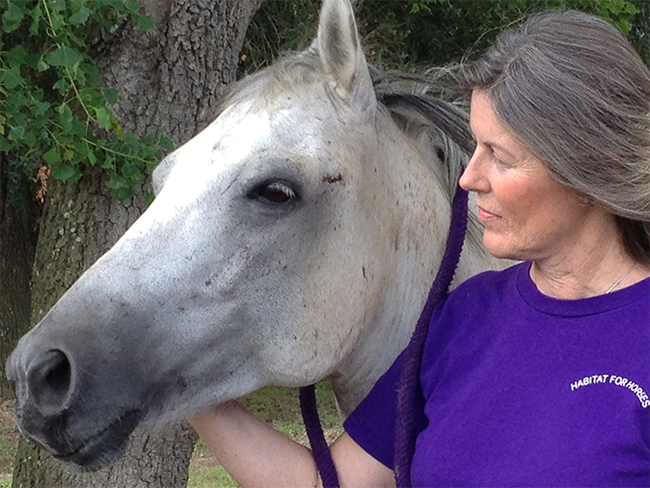 The seizure took two days. When we started no one knew the number of horses back in the woods or the condition of the majority of horses. The seizure warrant was based on the horses we’d seen from the road and the one laying in the brush at the edge of the property. While we were on the scene, law enforcement kept the man occupied because, as is often the case in large seizures, sanity wasn’t a strong personality trait of the owner.

The horses seemed to come from everywhere – some halfway healthy, others just barely alive. Studs ruled small groups of mares or fought to gain a mare. Several hid from everyone. Our job – find them, get a halter on them, lead them to the identification crew where they would have their picture taken, and from there to the trailer loading crew.

Mid-afternoon of the first day I heard a horrifying scream from a volunteer. One of the very emaciated horses had come out of the heavy brush and was immediately attacked by another stud. Within seconds the weak horse lay on the ground, its thin neck broken. Knowing that if given just a small amount of time, it would have been safely taken away, that death was hard on all of us.

Another thin horse came out of the woods, a flea-bitten gray. Perhaps it was all the commotion he heard; perhaps he knew that help was here. Whatever inspired that first tentative step into our arms changed the lives of a number of people forever. 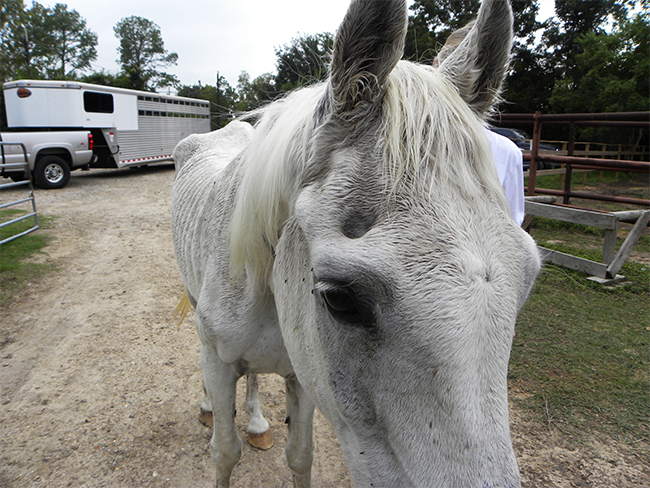 Seldom have I seen a horse so thin, so weak. He did his best to stand for the pictures, but stepping into the trailer was simply beyond his capability. He fell, twice, and the efforts of six men proved worthless. We let him rest. A volunteer sat with him and hand fed him water for several hours while we gathered other horses. Finally he stood up, ready to make another attempt.

One of our volunteers, Rebecca, had a trailer with a ramp. Rather than watch the horse struggle again trying to step into a regular trailer, she very slowly walked him up the ramp to her trailer, leaving him untied in case he fell.

We had a special intake area set up at a local park. Knowing that the horse needed special attention, she suggested, “Why don’t I just take him to my house? That way I can do one-on-one with him.” A few hours later, I stopped by Rebecca’s and found her with the horse in a small pen close to her house.

Most of my years in this line of work has been spent around horses that, because the way the have been treated, feel like complete rejects. Just as with a dog, if you yell at it, hit it, kick it day in and day out, the horse either becomes extremely aggressive or completely withdrawn. Apart from the physical condition, I could tell that mentally this horse had pulled back as much as possible. Rehab, in this case, was going to require a lot of work. 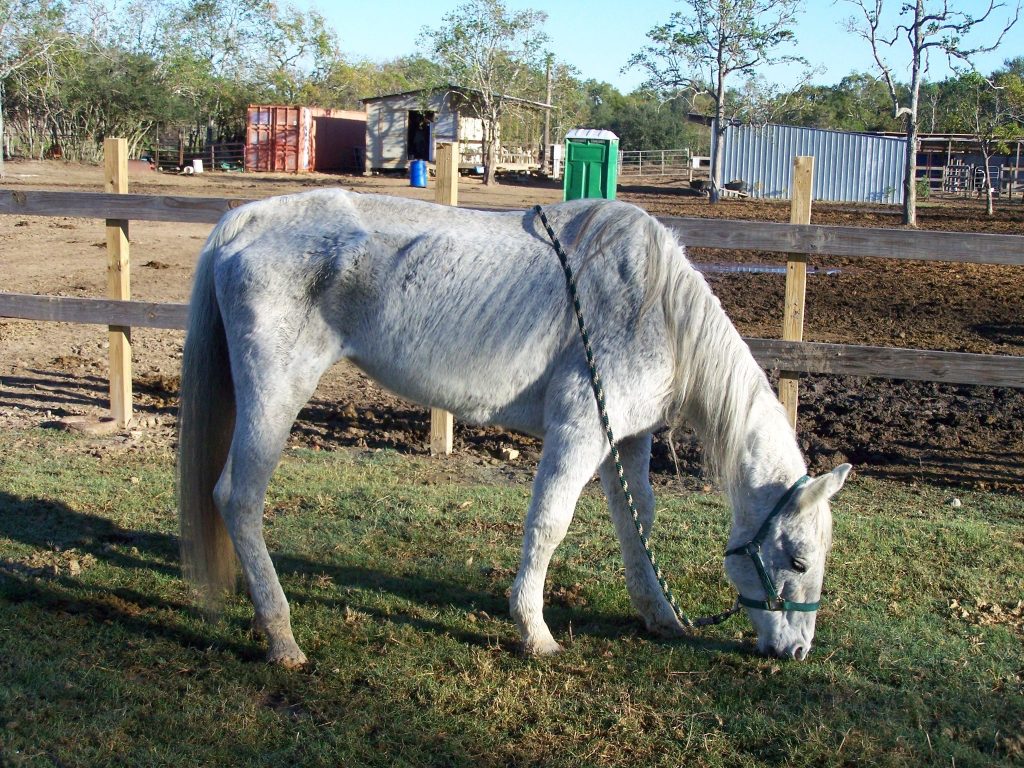 “His name is Blue,” she said as I walked up. “It’s a good, solid name and it fits him. He’ll be fine right here. Blue needs to know that he’s safe, and he’s safe here.” Her moist eyes told of the emotions she was feeling as she gently brushed him. It looked like she had given him a bath just outside the pen.

One of the things I teach to our volunteers before we go on a seizure is that we are there to do a job – to assist law enforcement by gathering the horses, doing the identification work, loading them in a trailer and transporting them to a place of safety. While we are on location, we do not allow anyone to show emotions – crying out, breaking down, getting angry. We do our job, get off the location, and only then, if we really feel like it, can we scream and cry and show our rage and frustration.

This seizure involved a horse that almost made it to safety, but ended up dead. It involved several other horses that were dead before we arrived and from the looks of many of those we had gathered, it was doubtful that several of them would survive. Sometimes, no matter how hard we try, they are simply too far gone.

I could tell by the way Rebecca was acting that she was coming down from her “just do the job” performance. It’s rough for most of us. Rebecca was standing next to what was once a perfect horse. In her eyes, he still was. There was a lot of work to do keep him alive, but no one was better qualified.

The next few months brought Blue right next door to death. Time after time Rebecca would find him flat out, barely breathing. The calls for help came at all hours – in the dark hours before sunrise, mid-afternoon. Someone was always available to help and between them, magically Blue would be back on his feet. 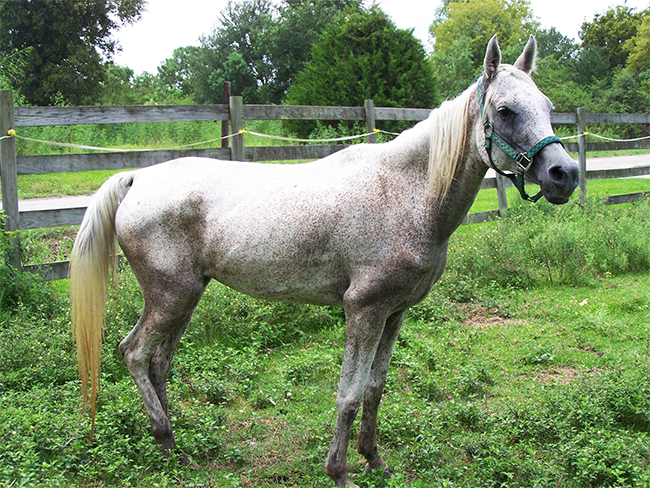 Refeeding a horse in Blue’s condition is a highly specialized skill. Too much food or the wrong kind and an emaciated horse will die within a few days. Initially Blue ate very small amounts six times a day, then gradually the amount increased and the frequency decreased. It wasn’t long before we could detect a small amount of muscle starting to build. That was our goal – taking the refeeding slow and easy. The weight gain would come soon enough.

While the body was gaining strength, Rebecca worked on his spirit, fighting Blue’s desire to give up. Horses that close to death often lose the spark of life that makes the rest of us fight to live. I well remember the afternoon about two weeks into his stay when I was in his pen giving him medication. Rebecca had to go back into her house for something. He watched her intensely, walked over to the fence, and whinnied when she came back out the door.

That was the first sign, the spark. He was interested in her, in what she was doing. He once again was connected to life. In celebration and with damp eyes, I gave him a hug. Blue was going to live. He started talking to the other horses, visiting with them over his fence and yelling out when he saw Rebecca. His spirit came alive through the strength and resolve of her spirit.

In the rescue business, I’m often confronted by those who have never made a connection with a horse. “You need to put those old guys down, get them out of the way,” they’d tell me. “Make room for those that can be used again.” Blue would never be ridden again. In the minds of many, he’s useless.

Many months later, when I discussed Blue with his adopter, she said,”Some might say he’s useless, but here is why they’re wrong. He’s a living creature of God and deserves a chance at living. We humans are responsible for their care and well being. He brings joy to all who come around him, human and horse. No, Blue has purpose and we owe him the best we can give. Why not put Blue down? Simple, he wants to live.”

We continually search for the perfect adopter for each one of our horses,where they can live the rest of their lives. Our hope is that those years will be full of mutual love and respect. His feed bowl will always be there for him, the hay will always be plentiful and his horse and human friends will spend endless days enjoying one another.

Our encounters with the horses and donkeys under our care often start in the most horrible places one might imagine. It takes highly skilled employees and devoted volunteers to salvage what little remains of life from those scenes. The restoration and rehabilitation of the body and spirit? That’s the magic that happens when devoted people come together.

It happens because of your devotion to all we do, for your donated dollars tie us all together. Your dollars pay for the trucks and trailers, for the pastures and feed, for the employees and medical services, fuel and bandages and the endless list of a million physical things that are needed and necessary to bring Blue back to life.

Your prayers and support are what keeps all of us inspired and motivated. Your words provide the knowledge that our hands are doing the work you want us to do, that our spirits are lifted by your prayers.

One doesn’t work without the other. It takes both your dollars and your support to give life back to horses like Blue. Can we count on you? Will you stand beside us? Will you be a part of all we do?