A biologist’s response to the BLM’s wild horse “problem”

A biologist’s response to the BLM’s wild horse “problem” 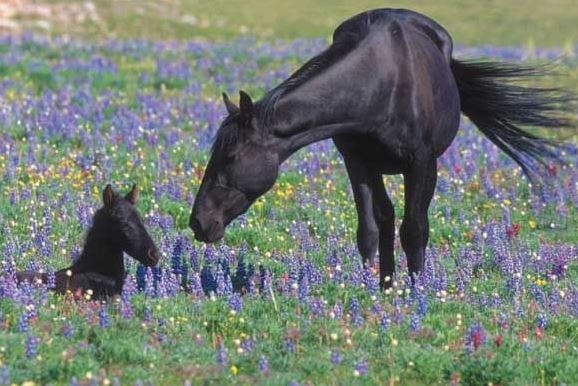 Wildlife biologist and long time advocate of the wild horses and burros in the West, Robert C Bauer is our guest writer today. He responds to the Washington Post’s recent article on the BLM’s request for solutions to management of the wild horses of the U.S. ~ HfH 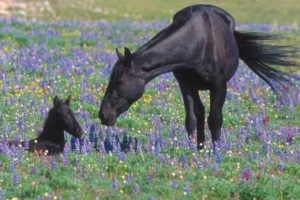 In a recent article that was published in the Washington Post, under Health and Science, entitled “U.S. looking for ideas to help manage wild-horse overpopulation”, a plea was sent out by the Bureau of Land Management (BLM), a plea that requested ideas as to how to manage the wild horse and burro population in the wild. This plea was reinforced by claims that the wild horse and burro population, on the western rangelands, was approximately 40,605 wild horses and or burros. Additionally it was stated that there would be at least a 15% to 20% annual population growth rate of these wild horses and that in 6 years, by the year 2020, that number will have grown to be about 145,000 wild horses and burros in the wild. Its claims also stated that contraceptive efforts had failed, and that the range lands could only sustain about 26,677 wild horses and or burros. The undying claims of the BLM are that it is, in its efforts, out to help maintain a thriving natural ecological balance. This is the motivation to justify its roundups of thousands of wild horses that it says are destroying the rangelands of the west. As a biologist, there is a scientific response to these allegations that the public needs to take into consideration before swallowing these claims of the BLM.

There are numerous factors that govern population growth in the wild for wild horses and burros, or lack of population growth. The National Academy of Sciences did a study of the wild horse populations, using 8,764 wild horses, in the wild, as a basis for the following statistics. It found that 1st year mortality rates annually ranged between 14% and 50%. Beyond this, adult mortality was found to annually range between 5% and 25%. What this means is, that in any given year, equine mortality on the range lands would be anywhere between 19% and 75% of the total population of wild horses. I would ask that the reader to let these percentages sink in. This mortality occurs naturally, due to predators of the wild horses and burros, which do indeed exist, along with environmental and weather related factors, which also affect competitive grazers. In addition sex ratios were found to average around 55% female and 45% male. This must be considered as obviously only females can put a foal on the ground. This is something that the BLM statistics do not reflect, but have conveniently neglected in its population growth claims. The genders of foals must be taken into consideration, as not all foals are female, and only those that are females can begin to reproduce, but only after the 2nd year. Added to this are considerations of delayed implantation, when the gestation period of a mare actually extends, due to stressful conditions on the range. Spontaneous abortion also needs to be mentioned, along with selective breeding by the band stallions, whereby perhaps only one mare, if any at all, are bred, under harsh range conditions. It then must be stated that added to this natural inhibition are those artificial adjustments added by the BLM that only serve to encourage the extinction of these wild ones. The use of the PZP contraceptive is one, which has been found to inhibit reproduction in those mares that were treated, for up to 2 years, carrying with it other physiological side effects. After the roundups of the BLM, which have been very aggressive, and relentless, roundups of which this individual has both documented and videoed, sex ratios are adjusted to roughly 47% female to 53% male. This man made decrease in female density, along with the aggressive use of PZP by the BLM, have devastating effects on wild horse and burro populations. These only encourage annual reproductive rates that are far less than natural on range mortality. The result is diminishing numbers of wild horses and burros on the rangelands of the west. To further complicate population growth are the countless illegal killings of the wild horses, motivated by age old prejudices, most of which go uncaught. Also what must be included are the aggressive roundups of the BLM. All of these variables serve not only to disprove the astronomical population growth rates of the BLM but also overall numbers in the wild.

The false allegations, by the BLM, that the numbers of wild horses on the range, could increase from 40,605 to 145,000 by the year 2020, a 6 year period, can easily be illustrated by a similar scenario. This occurred in the 2009/2010 Calico Mt. round ups, that occurred in northwestern Nevada. In this situation, according to the BLM, at the end of the 2004/2005 gather there were 575 horses total existing in the five HMAs making up what would be called the Calico Mt complex. That population of 575, according to the BLM, in just a 4 year period, had grown to 3055 horses. Of those 3055 horses and burros the BLM intended to gather 2,476 – 2,787 horses, then releasing up to 264. The sex ratio after the 2004/2005 gather, however, was reported to be only 47% female and 53% male, which means only 47% of those horses would be able to contribute to a population growth. Added to this, the PZP contraceptive had been administered, which was still in the experimental stage, and has been proven to disrupt the social structure of the wild horse and burro bands as well as to result in an increase of futile matings. Of those 47% mares, 239 were said to have been inoculated with this PZP contraceptive which has roughly a two year effect.

Second, as stated earlier, it has been found that the minimum adult on the range annual mortality to be approximately 5%. This factor also was not included in the BLM’s calculations which further reduced the possibility of this meager wild horse population of 575 in reaching 3055 horses in just a 4 year period. Indeed, the number of horses that were rounded up, were only 1,992, at which point no other horses could be found. Yet calculating a population growth from 575 horses to even 1,992 horses in a 4 year period, including just a 5% annual mortality, 47% of the population being mares being able to put a foal on the ground, and eliminating 239 of that 47% for the first 2 years because of PZP, it would require a 125% annual reproductive rate to offset these variables to reach that number. Such reproductive rates do not occur in nature, which leads one to question or theorize exactly how those horses got out there!! To state that 40,605 wild horses could increase to 145,000 horses in just a 6 year period, while factoring in natural mortality rates along with all other natural variables, would require astronomical reproductive rates to offset those variables. Such reproductive rates do not and never will occur in nature. Indeed, using the BLM’s own population statistics, factoring in nature’s mortality, sex ratios, aggressive use of PZP, while subtracting wild horses that have been rounded up, the numbers of wild horses and or burros remaining in the wild are in the low teens, if that. Our wild horses and burros, existing in the wild, are close to extinction!!

In spite of the BLM’s assertions, that it is striving to maintain a thriving natural ecological balance, its methods and the manner in which they are being carried out, are anything but natural, nor do they bring about any balance. Indeed, it is by these very methods, that the BLM uses, that the wild horses and burros, along with other aspects on the range are being thrown out of balance. Nature, through its own mechanisms, has been maintaining what the BLM have termed, a thriving natural ecological balance, for thousands of years, without the artificial methods of mankind. Indeed, it is mankind’s incessant belief that he must manage nature, which has thrown nature continually and consistently out of balance. This makes the wild horse and burro program of the BLM completely unnecessary. This program, however, is the very avenue by which the wild horses and burros will be raped from their legally designated lands, and nature destroyed.

This brings up a vital question to the reader. With such factors as these existing, that govern wild horse and burros populations, along with the unnatural efforts of the BLM, that further degrade these same numbers, what are the true motivations of the BLM for distorting the numbers of wild horses and destroying these vital natural resources to true ecological balance? The answer lies partly in livestock, mining, and energy interests. The cow flop gets deeper when one realizes that in order for the BLM to acquire continued and increasing appropriations from congress, it has to justify the appropriations that it has already been getting. Appropriations means not only a continued Wild Horse and Burro Program, but a lot of money to be made, not just for BLM employees but contractors that the BLM employs in the roundups, like the Cattoors, and Sun J, helicopter contactors. This translates to a situation where the BLM has to somehow convince the public and congress, by whatever means possible, that the wild horses and burros are breeding like rabbits, and that the numbers are way out of control. Here comes the deceit and distortion of numbers. Somehow the public, for the most part swallows what the government is saying, hook line and sinker, without seeking the truly scientific truth, a truth which is for the most part grade school science. For example, the BLM could say that the appropriate management level of wild horses in a certain area is only 600 wild horses. In truth there may be only 300 wild horses there, but the BLM, to justify removal, continued appropriations, and appeasement of the livestock industry, will claim 900 horses existing in the area. It will in turn say we need to round up 300 horses to bring the numbers back to its appropriate management level of 600, (see article entitled “The Unnatural Concept of the Appropriate Management Level”). It will roundup 300 horses, zero out the area to make it available for the livestock industry, and still claim that there are 600 wild horses existing in that area. This is a simple illustration but it is a tactic of the BLM. This further translates to a governmental conspiracy by our government against wild horse and burro populations, in the wild, (see books written by wildlife ecologist, Craig Downer, “The Wild Horse Conspiracy “, and “Wild Horses: Living Symbols of Freedom”).

In conclusion, the wild horses and burros are a vital component to ecological balance out on the range lands of the west, the benefits of which are innumerable as opposed to cattle. The numbers of these beautiful animals must be dictated, however, by nature itself and not man, through its own mechanisms. Only in this manner will wild horse numbers be in balance with all other forms of wildlife, including those of the predators of the wild horses. The wild horses are just this, wild, and in the wild, no matter how harsh or how mild the conditions may be, is where their beauty and their benefits exist and can be experienced. The range lands that were once filled with vast numbers of wild horses, and other forms of wildlife, are now quickly dying due to the artificial efforts of our government. The rangelands, however, can easily sustain not only the wild horses and burros existing out there now, but also every one of those in holding facilities, which now number well over 40,000. The truth is that every one of those wild horses and burros in holding facilities, if released back to the areas from which they were taken, along with those in the wild, would help bring the balance back to the rangelands, a balance that is so very vital!!